To reduce the risk of spreading the COVID-19 virus,
we are reluctantly suspending DNCB Outings, and DNS Meetings, until further notice.
We need to practice social distancing – at least 2m apart.
There are lots of outdoor spaces close to home, so we can continue to do our personal outings.
Stay safe.

We are sad to report that our good friend and inspirational leader, Tom Bearss, died on Friday, April 10, 2020.

Frozen in Time
The following is a video, posted on YouTube, from images of Tom collected by David Hoar and Noreen Rudd since they became involved with Delta Nats in 2016.  Chris McVittie also contributed a few photos, and David also cropped Tom from 60-70 group photos to get the 243 images used here.

The following article was posted in the Delta Optimist, on April 16, 2020
Delta’s birding community loses a leader with Tom Bearss’ passing
by Anne Murray
– the text of that article is posted below. 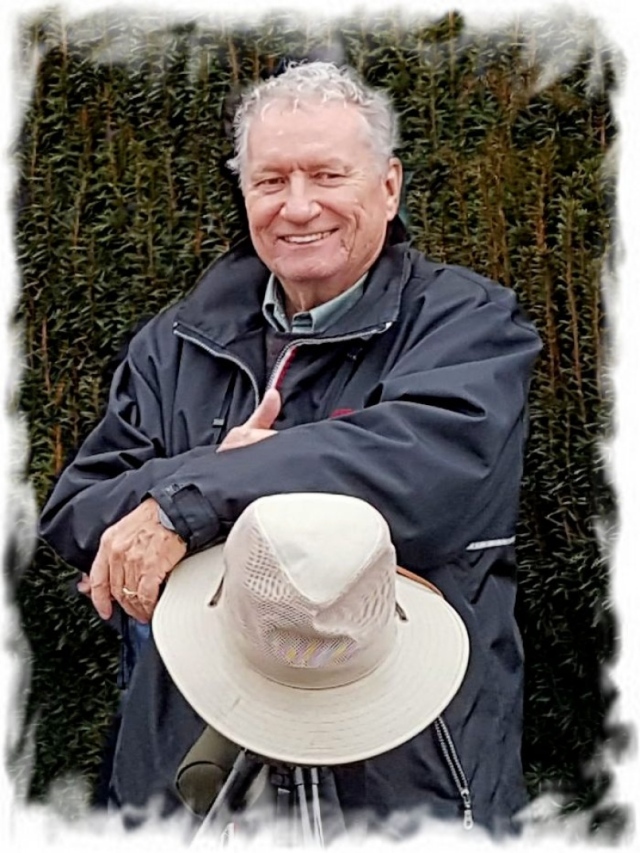 Noted naturalist and author Anne Murray has put together this tribute to Tom Bearss, president of Delta Naturalists Society, who passed away April 10:

Many of us in Delta and around B.C. are mourning the loss of our dear friend Tom Bearss, an outstanding citizen, charismatic leader, and much-loved companion to hundreds of birders, golfers, hockey players, beer drinkers and community volunteers.  He left us too soon.

Tom had an outstanding record of service with the Delta Naturalists’ Society (Delta Nats) and its provincial parent organization, BC Nature.  Tom quickly became an active participant in the naturalist community when he and his wife, Sandra, retired to Delta in 2006.  His interest in birds had grown through a life that led him from Ontario to Australia and the West Indies, among other exotic locales.

Arriving in Delta, he soon discovered Reifel Bird Sanctuary, the annual Christmas bird counts and Delta Nats, where his lively personality and habit of successfully cajoling people to volunteer, began a revitalization of the then relatively small club.

Within a couple of years, he had started the midweek Casual Birders group, which soon grew from a handful of local birders to a diverse and widespread bunch of enthusiasts from around the Lower Mainland.  Tom kept this group going, rain or shine, every week, with whoever turned up, whether beginner birders, keeners, or curious tourists.  Even random passers-by got drawn into the fun, as they stopped to see what this odd group of people was doing as they peered into bushes or cluttered up the dykes.

In this way, Tom and his Casual Birders introduced dozens of people to birdwatching while creating a social and fun weekly event to which everyone is welcome.  The effectiveness of the group was greatly enhanced by Tom’s light-hearted, written report, completed promptly after each trip – no mean feat in itself!

After the first year, Tom was encouraged to put his literary masterpieces on a blog, which soon became the go-to-place for photographs (always including the group photo), birding links, and other Delta Naturalist news.  You can see the blog at www.dncb.wordpress.com and on the Delta Optimist website (https://www.delta-optimist.com/authors?author=tom%20bearss)

Ever the persuasive diplomat (his career before birding, golf and hockey retirement), Tom succeeded in organizing other Delta Nats members into keeping the archives, uploading photos and managing the blog, while also juggling a large number of other club activities.  Under his presidency, the club hosted a very successful BC Nature Fall General Meeting in 2011, involving nearly 200 people.

The club provides displays throughout the summer months at public events around the Lower Mainland, including the annual Watershed Park Fish Release, Delta Farmland and Wildlife Trust’s Day at the Farm and the new Welcome Back the Birds event with Birds Canada last fall.

Four times a year, Tom and the club host a “Birds on the Bay” event at Boundary Bay Regional Park, a birding walk followed by a light lunch of home-cooked goodies, including Sandra’s famous egg-sandwiches.

About eight years ago, Tom got a task force involved in doing nest box maintenance in the Regional Park, as well as organizing nestboxes at Delta golf courses.  Since then, nest boxes for tree swallows and barn owls made by a talented group of volunteers have been erected and maintained all over Delta and beyond.

While much of the hands-on work is done by others, it was Tom’s contagious enthusiasm, caustic teasing and boundless energy, especially when twisting someone else’s arm, that kept everyone happily working together!

In 2014, Tom was awarded a BC Nature Club Service Award for his achievements, but did not rest on his laurels.  He signed on as a member of the board for the BC Naturalists Foundation (a sister organization to BC Nature) and never missed any of the twice-yearly BC Nature meetings held in various locations around the province.  As Alan Burger, a past-President of BC Nature wrote: “Having a beer or two with Tom and joining him on early morning birding were among the major highlights of my BC Nature meeting for many years.”

While Tom was a little wary of engaging in the cut-and-thrust of controversial conservation issues, he was very supportive of Delta Naturalists’ positions on the protection of bird populations and habitat.  He particularly liked the creation of our colourful brochures on local birds and where to go birding, featuring his Delta Nats’ “photogs” pictures.  Over 20,000 brochures have been distributed, with the help of the city, Reifel Bird Sanctuary and other partners.  Tom enthusiastically participated in two presentations to Delta council on our Birds and Biodiversity Conservation Strategy initiative, which has become a significant part of the City of Delta’s policy on environmental management and procedures.

When the world’s bird scientists came to Vancouver for the International Ornithological Conference in 2018, Tom immediately volunteered to lead a walk at Boundary Bay for some of the world-wide delegates, a task he did with his usual enthusiasm and aplomb.

Tom’s deep commitment to 10 years of weekly Casual Birding walks, rain or shine, and writing his lively blog, was most impressive.  He fostered an open and inclusive social atmosphere which has been a wonderful asset for those looking to explore nature in the lower mainland in the company of other like-minded people.  In this way, he made a profound difference to Delta’s naturalist community and his influence spread far beyond local boundaries.

In the words of his many friends: “We will always keep Tom’s big smile and good nature in our hearts”, “he was a great friend, leader and inspiration” and “will be sorely missed.”

You were greatly loved, Tom.  Farewell from all your many, many friends in the birding community and beyond.

DNS: Delta Naturalists are a group of nature lovers whose aim is to foster interest in the natural history of the Fraser delta by sharing and enjoying nature and promoting environmental awareness and conservation. DNCB: Delta Nats Casual Birders is a group of Casual Birders who go Birding at different locations each week, usually within the Lower Mainland or in nearby Washington State.
View all posts by dncb →
This entry was posted in *DNCB. Bookmark the permalink.