To reduce the risk of spreading the COVID-19 virus,
we are reluctantly suspending DNCB Outings, and DNS Meetings, until further notice.
We need to practice social distancing – at least 2m apart.
There are lots of outdoor spaces close to home, so we can continue to do our personal outings.
Stay safe.

It was a cold and windy Tuesday morning, but twenty-two DNCBers enjoyed a productive and fun outing wandering the trails of Iona Regional Park (IRP) and the Sewage Lagoons next door.  You can check out the brilliant photo evidence on our DNCB Flickr site.

Some car-pooled from Petra’s at 7:30 am, others drove directly from home, while some arrived late as the rush hour traffic was horrendous on 99 before the Oak Street bridge.  Fortunately, the newly-arrived Swallows, mostly Tree and perhaps some Violet-Green, entertained the group hawking insects above the washroom parking lot pond.

Since the tide was high, we followed our regular route along the trail between the two ponds past the Wild Research Banding hut.  Not much in the two ponds, but lots of the “regular little birds” in the bushes.  Wrens were chattering everywhere, and many got good looks at both Bewick’s and Marsh Wrens perched on the reeds.  Richmond Brian’s eBird List (see below) shows that we saw 32 species this morning, including the flock of Snow Geese that daughter Erica saw on the drive into the park.

We couldn’t find a Tufted Duck among the Scaup, but we did find a few Ring-necked Ducks and a gorgeous male Canvasback (possible Bird of the Day for some).  As we walked the trail between the ponds, as expected the birds would drift to the other side, but our bins and scopes were very helpful.

We left the sewage ponds and followed the trail toward the Fraser.  We were blanked on Kinglets, Flycatchers and Warblers that we hoped/expected to see in the trees, but we got a few neat sightings along the river.  Three Red-breasted Mergansers, Double-crested Cormorants, a three Trumpeter Swan fly-over, a gliding silver male Northern Harrier, and huddled flock of Dunlin on a sand spit on the other side were neat to see.

We got back to the beach and the tide had started to recede.  Flocks of Dunlin began to arrive, and some interesting Gull species were seen among them, including Bonaparte’s, Mew, and Iceland (formerly Thayer’s), as well as the resident Glaucous-winged Gulls. Glad Guru Anne was there to confirm these ID’s; gulls are tough especially in non-breeding plumage.

It was just past 11:00 am and although some wimps had bailed earlier, eleven of us decided to go to our regular Iona lunch venue, the Flying Beaver Pub.  We had the best seats in the house on the patio overlooking another arm of the Fraser and the Harbour Air planes landing and taking off.  Although my meal of Chicken Vege Soup and Tea wasn’t very exciting, daughter Erica paid for it, and the company was as always, almost interesting.  Welcome-back Ken took some neat photos of lunch.  All things considered, it was another super DNCB outing. 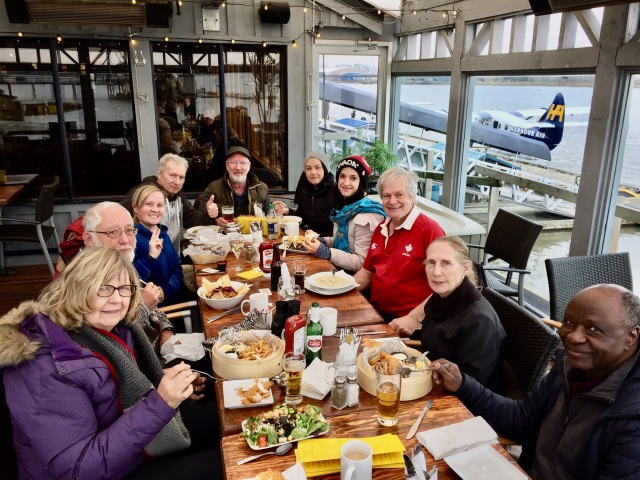 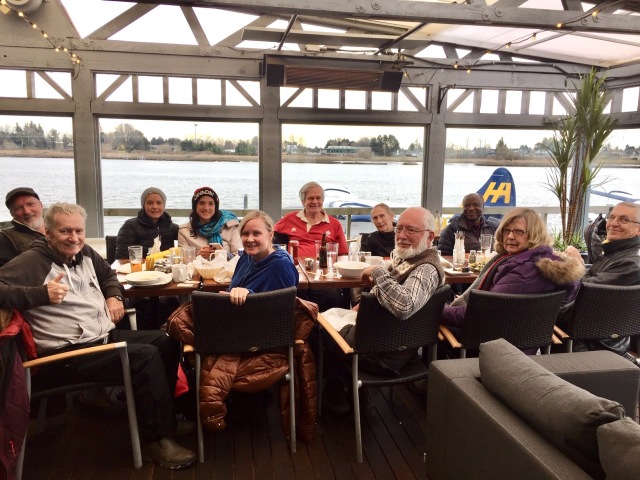 Next Wednesday (not Tuesday), March 18, is our quarterly Birds on the Bay outing.  THIS HAS BEEN CANCELLED DUE TO CORONA VIRUS CONCERNS.

For more info on this and other outings, reports, photos and events, check out our DNCB website.  As always, your comments are appreciated, and let me know if this weekly drivel is so irritating that you want off my email list.  Cheers: Tom

DNS: Delta Naturalists are a group of nature lovers whose aim is to foster interest in the natural history of the Fraser delta by sharing and enjoying nature and promoting environmental awareness and conservation. DNCB: Delta Nats Casual Birders is a group of Casual Birders who go Birding at different locations each week, usually within the Lower Mainland or in nearby Washington State.
View all posts by dncb →
This entry was posted in *DNCB, Bonaparte's Gull, Canvasback, Dunlin, Iceland Gull, Iona, Mew Gull, Northern Harrier, Red-breasted Merganser, Ring-necked Duck, Thayer's Gull, Trumpeter Swan. Bookmark the permalink.