Sixteen DNCBers enjoyed a “local” outing on Wednesday to the Tsawwassen Ferry  terminal, then the ponds on TFN land, then Reifel Bird Sanctuary.  We had over 50 species seen (see Anne’s eBird list below); check out the photo evidence on our DNCB Flickr site.

It was another gorgeous Delta morning when most left Petra’s at 7:30 am, and eleven of us met at Beach Grove Park to check out the Great Horned Owl family.  We only found the Dad.  Mom and two owlets were also seen a few days ago.  A third owlet was taken to OWL a couple of weeks ago when it left the nest too early.  It will be released soon back in Beach Grove Park.  Wilson’s Warblers were heard here, mostly by our DNCB prodigy Kathryn.

We carried on to the ferry terminal causeway.  At the pull-out Jim took the first Group Photo (11)

as we looked at Black Oystercatchers, Brant Geese, Surf Scoters, Common Loons and lots of Great Blue Herons from the nearby Heronry at Tsatsu Shores.  We were blanked on the White Pelican seen a few days earlier.

We moved on to the new “pond park” on the TFN land which was nicely filled with waterfowl.  We saw Gadwall, Bufflehead, Lesser Scaup, Green-winged Teal, Northern Shovelers, Northern Pintail, Jim spotted a Common Goldeneye, plus Mallards, American Wigeon and Canada Geese.  Marsh Wrens were everywhere, and lots of Sparrows too (Savannah, Golden- & White-crowned, Song, perhaps a Lincoln’s).  We continued on through the Ladner fields to Westham Island and Reifel.

We got to Reifel around 9:15 am and met the others, and a welcoming Black-headed Grosbeak at the entrance.  A dazzling male Yellow-rumped (Audubon’s) Warbler was in the same tree.  A lone Greater Yellowlegs was in the pond beneath the trees where the Black-crowned Night Herons normally roost.  As we started our walk among the hordes of ducks on the path, it was evident that this should be a good year for Wood Duck nesting.  There were lots of magnificent pairs around.  Unfortunately, there were also lots of House Sparrows and Brown-headed Cowbirds around too.  Interestingly, a White-fronted Goose was there too.  A “visitor” took our second Group Photo (16) at the customary Snow Goose sign. 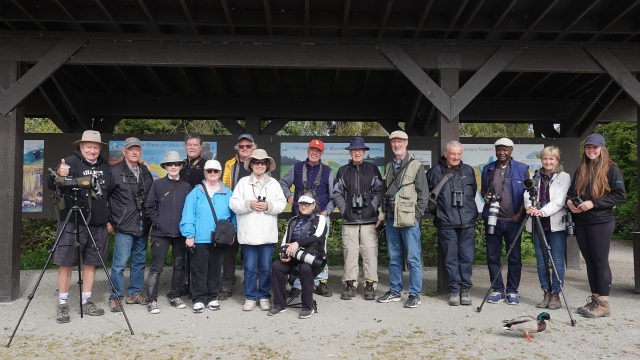 We walked the outside trail for a change.  We were blanked on American Bitterns but did see Long-billed Dowitchers and a lone Spotted Sandpiper, with spots and tail bobbing. In the strait we could see hundreds of Peeps, but too far away to identify species, probably Least Sandpipers and others.  For raptors, we saw Northern Harriers and Red-tailed Hawks, and were surprised by a Sharp-shinned Hawk later near the entrance.  Barn Swallows were nesting in the sheds along the outer path and it was nice to see the Purple Martins at their condo lodge.  The resident male Sandhill Crane was sitting on egg(s) at their same nest (Canada Goose vacated the nest last weekend).  The female was on guard duty nearby.  We also saw last year’s juvenile at the entrance with two other young birds.

Approaching 11:45 am, we decided to go for lunch at our regular Ladner spot, Speed’s Pub.  I missed lunch as I spent an hour back at the causeway then TFN lands looking for my lost Hearing Aid Blue Tooth.  I was frantic, until arriving home around 4:00 pm, I found it on the counter where I left it in the morning.  Getting old sucks sometime.  I heard from Jim that the lunch, and beer, were delicious.  I had a Root Beer and Burger at A&W at 1:30 pm before doing a number of “chores” for daughter Erica.  Nonetheless, it was another awesome DNCB outing.

On MONDAY, May 13, we will have an extra DNCB outing to Victoria, meeting on the 7:00 am ferry to Swartz Bay.

Then on Wednesday, May 15, our DNCB destination is Jackman Wetlands, Aldergrove. Leave Petra’s at 7:30; meet at 272nd Street and 10th avenue across from the Transfer Station at 8:30.

Also, this Saturday, May 11, Terry Carr will have our Nats Display at the Heritage Fair at the Harris Barn in Ladner.  Nat Geof Hacker will also have his interesting local heritage display there too.

For more info on these outings, and other info, reports and photos, see our website.  As always, your comments are welcome, and if these long-winded missives bore you, let me know and I’ll take you off my email list.  Cheers: Tom