Fourteen DNCBers enjoyed a fantastic, well-organized, all-day outing to an exciting new destination, Sidney Spit, a Gulf Islands National Park off Vancouver Island.  We saw lots of neat birds too; check out the photo evidence on our DNCB Flickr site.

We met on the 7:00 am ferry from Tsawwassen to Swartz Bay, and yes, Free for us Seniors.  It was a bit overcast, but after wolfing down the famous White Spot Traditional Breakfast on board, most of us stayed at the bow in search of pelagic rarities.  We saw cormorants, a few gulls and one Pigeon Guillemot.  Even Active Pass was quiet.  Not the beginning we were hoping for.  But the conversation was riveting, especially reminiscing/bragging about the past wild and wonderful sightings we’ve had on these ferry trips.

We arrived on time (8:40 am) at Swartz Bay and boarded the double-decker bus ($5 for day pass) to Sidney.  The walk in beautiful downtown Sidney to the Sidney Spit ferry dock was exactly 7 minutes, as Terry predicted.  We got there just before the 9:30 am ticket booth opening, so David took the first Group Photo here. 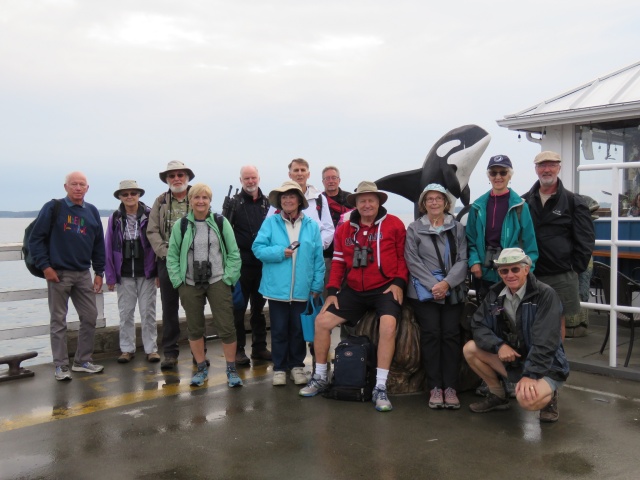 From the dock we scoped Pigeon Guillemots, Pelagic & Double-crested Cormorants and in the distance Marbled Murrelets, Common Murres and Rhinoceros Auklets.  Return fare on the Alpine Ferry (10:00 am departure, holds 41 passengers and only operates in the Summer) was $16 for the 25 minute crossing to Sidney Island.

On the very smooth crossing, we had closer looks at some of the afore-mentioned pelagic species, and enjoyed the spectacular scenery of the spit and the surrounding Gulf Islands.  At the picnic tables near the dock, from informative signage we learned that Sidney Spit was a National Park Reserve.  Barn Swallows serenaded us, and a few Purple Martins were still hanging around their numbered nest boxes.

We started our walk out the Spit and the array of Shorebird sightings, up-close-and-personal began.  High Tide was receding so our timing was perfect.  A flock of Least Sandpipers were in the first pond.  We have some decent birders in our group, but I must thank our Guru Anne and sometimes irremediable (look it up) Roger, for confirming the identification of the Shorebirds we saw.  To some of us they all look the same, and it’s very confusing, especially for Peeps.

The next group we saw were Western Sandpipers (which we originally thought the Least were).  Then a few Sanderling were running along the other side with a couple of Westerns.  Then we saw a flock of Semipalmated Plovers (like baby Killdeer) that we could all identify.  Then a half dozen Baird’s Sandpipers (longer wings because they fly from Arctic to Antarctic) landed in front of us foraging among the rocks and moss.  Obviously, these flocks were all mixed flocks, and we saw birds among them that looked a bit different, but we couldn’t be sure on ID’s.  We wanted to see a Semi-palmated Sandpiper to round out our Peep sightings.  A Greater Yellowlegs gave a nice fly-past and lots of brilliant Black Oystercatchers there too.

As for Gulls, we came upon a resting flock of California Gulls (black & red on bill tip). Glaucous-winged Gulls, and hybrids, were there too, and I think Ring-billed.  One Gull was photographed trying to swallow a huge Flathead Sole.  Lots of Mew Gulls were seen on the ferry crossing, but we were blanked on expected Bonaparte Gulls.

The walk along the length of the Spit to the Lighthouse and back was a very comfortable and enjoyable 2 hours.  It warmed up nicely; I felt like a swim, but didn’t.  We did not see any Common Nighthawks which they claim nest there.

At 12:30 pm we gathered for our picnic lunch at the tables.  No beer!  I didn’t need much after the huge Ferry Breakfast; a boiled egg, apple, Anne’s plum, bread, peanuts, granola bar and water hit the spot for me.  Lots of Sparrows surrounded us at lunch, mostly White-crowned, but Song and Savannah also seen.  PB Lorna’s Belted Kingfisher also joined us.

After lunch we began our walk toward the treed part of the island and the campground.  A Downy Woodpecker was pecking around one of the many holes in trunks made by Pileated Woodpeckers.  Several Red-breasted Nuthatches were calling, and some saw a number of Warblers including Yellow-rumped, Yellow, and Common Yellowthroats.  A Turkey Vulture flew over while Chestnut-backed Chickadees, Juncos and Northern Flickers were in the trees.  None of the apparent 1200 Fallow Deer on the island were seen.  American Goldfinches were feeding on Thistles.  It was another pleasant hour-long Lagoon Trail circular walk.  We got back to the pier approaching 2:30 pm in time for the 3:00 pm ride back to Sidney. 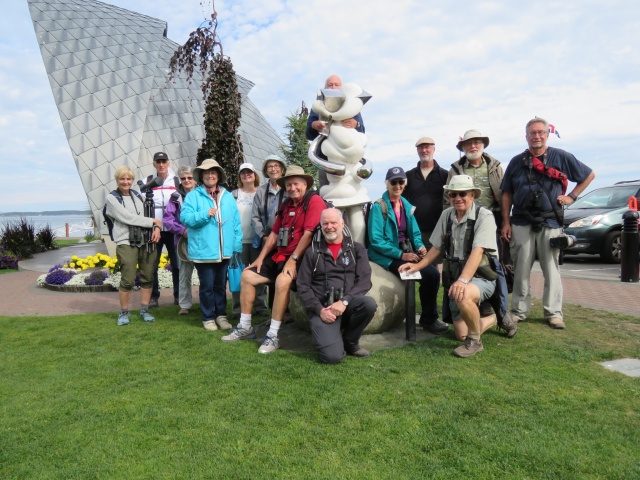 The walk in Sidney to the bus stop was interesting for the neat sculptures and “arty” shops along the way (my home-made ice cream sandwich was delish).  We caught the 4:00 pm bus to Swartz Bay then the 5:00 pm ferry back to Tsawwassen.  It was very pleasant on the ferry’s bow among the Islands, and we saw a few Harbour Porpoises, but some of us spent a lot of the return trip seated, examining the insides of our eye lids.  I was exhausted.

The bus from the terminal to the Ladner Bus exchange was efficient, and cheap (free using Ladner Jack’s Compass Card) and Richmond Brian got me home at a timely 7:15 pm.  We had a super organized venue, super views and sightings, with a super group of DNCBers on a super day.

Next Wednesday, September 5 is our annual day-long outing to Mt. Baker, again organized by the irreplaceable Terry Carr.  Leaving Petra’s at 7:00 am, the group will car-pool from the Peace Arch Park parking lot (behind the Duty Free Shop) at 7:30 am.  More details about this trip on our DNCB Maps page.

Also, don’t forget our first 2018/19 monthly Delta Nats meeting on Tuesday, Sept. 4 at the Benediction Lutheran Church in Tsawwassen at 7:30 pm.  Anne Murray will be giving a presentation on her recent Birding Adventures in China.  All welcome to join us.

As always, your comments are encouraged, and let me know if you want off my email list to receive these far-too-long missives simply bragging about my good times.  Cheers: Tom