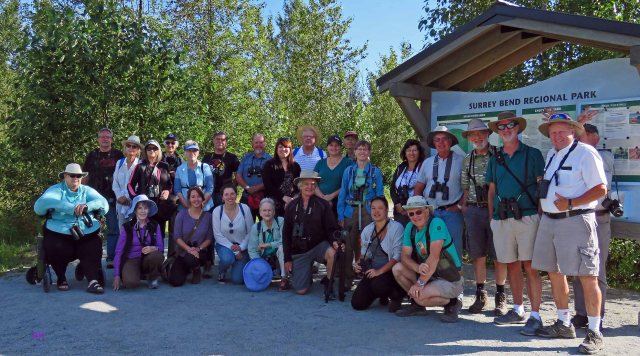 DNCB at Surrey Bend (minus Lorna) – photo by David Hoar

Waiting for the stragglers… photo by David Hoar

Twenty-seven DNCBers had a ball wandering around Surrey Bend Regional Park (SBRP) on another beautiful Wednesday morning in the lower mainland.  Check out the spectacular photos on our DNCB Flickr site.

Nine of us left Petra’s at 7:30 am, car-pooling smoothly in 3 vehicles, and arrived to the horde of smiling faces at the SBRP parking lot at 8:20 am.  We were delayed 10 minutes by a passing Container Train at the crossing near the park; otherwise, we would have been exactly on time at 8:10.

Following introductions and hugs, especially welcoming the five Metro Vancouver Parks Interpreters with Vanessa (Dianna, Alison, Brigit & Jessica) and our Langley Field Naturalist guru Anne G with Joanne, David took the Group Photo in front of the SBRP sign. We started our walk through the play structures to the river lookout. This would have been an awesome outing for blind folk as we heard a lot more species than we actually saw.

The view across the Fraser to Barnston Island and the mountains in the background was spectacular.  Lots of logs in the river, but no other-than-normal birds or seals seen.  The walk through the mostly huge Cottonwood Tree trail was cool, but lots of bugs (Thanks for the spray, Brian).  Lots of “hearings” and species discussions.  The large group got very spread out.  When I reached the end of the wooded area, many had gone quickly ahead along the open and hot marsh trail back to the parking lot.  Photogs got some nice shots of Butterflies and Plants.  Some other sightings along the way included Bushtits, Purple Finches, fledging Chickadees and Tree Swallows, Brown-headed Cowbirds, Northern Harriers, Juncos.

My now small group got back to the picnic tables around 11:15 am where many were waiting, and some had already left.  We discussed continuing on to Tynehead Park, but the majority were hungry and thirsty, so thirteen of us (see photos) bypassed Tynehead and drove to the Baselines Pub on 166 St in Surrey.  Good decision.  Many of us had the Beef on a Bun Special, with fries or salad for 9 bucks.  It was delicious, of course washed down with the obligatory pint of Canadian.

I drove Ladner Jack back to Tsawwassen and his snoring didn’t bother me a bit.  Home by 2:30 pm, on time to resume grandparenting duties.  SBRP is a beautiful, well-maintained park, all the participants were interesting and fun, and although we didn’t see a tonne of birds, it was another awesome DNCB outing.

Next Wednesday, July 11, is our Ferry outing to Saltspring Island.  We will meet on the 7:00 am ferry from Tsawwassen to Swartz Bay, connecting with the 9:00 ferry to Fulford Harbor and the 9:43 bus to Ganges.  Details on DNCB 2018 Outings page.

Check our website for more info on this outing, and to see earlier reports, photos and Delta Nats info.  As always, your comments are encouraged, and let me know if these rambling and boring missives are annoying and you want off my email list.  Cheers: Tom

DNS: Delta Naturalists are a group of nature lovers whose aim is to foster interest in the natural history of the Fraser delta by sharing and enjoying nature and promoting environmental awareness and conservation. DNCB: Delta Nats Casual Birders is a group of Casual Birders who go Birding at different locations each week, usually within the Lower Mainland or in nearby Washington State.
View all posts by dncb →
This entry was posted in *DNCB, Brown Creeper, Cedar Waxwing, Northern Harrier, Pacific-slope Flycatcher, Purple Finch, Red-eyed Vireo, Red-tailed Hawk, Surrey Bend, Swainson's Thrush, Western Wood-Pewee, Willow Flycatcher, Wilson’s Warbler, Yellow Warbler. Bookmark the permalink.