At least twenty-six DNCBers participated for some time (me for only the Photo op) on our Wednesday outing to Campbell Valley Park (CVP).  Check out the many beaut photos on our DNCB Flickr site.

Several folk car-pooled from Petra’s at 7:30 am, and I arrived at CVP at the same time, about 8:15 am.  David H was taking the Group Photo of 17 of us when I got the phone call for Aussie guest/relie pick-up at the Alaska Cruise Terminal in downtown Vancouver.  So I left and missed the outing.  Meanwhile others joined the group sporadically throughout the morning, eventually totalling 26 participants.

Roger submitted the report below, with attached Map, and several others offered sightings as well which I will incorporate.

Roger’s report:
I’ll try and give an idea of what was seen by the members in front.  Apparently Maureen, Pat & Manli arrived, but I never saw them.  Roy, without Solveig, showed up near the end, and who knows which others (Jack & Stella, Ken & Anne?) were out there on the trail?

When Tom left, we started by heading east on the “Little River Loop” and crossed the river on the boardwalk.  There wasn’t much to see except the odd squirrel (I didn’t see any Douglas but others did), American Robins, and Song Sparrows.  Following the east side down to the “Listening Bridge” we had numerous Black-headed Grosbeaks (we had seen one at the parking lot), lots of Swainson’s Thrushes (heard, not seen), Black-capped Chickadees, Spotted Towhees, more Song Sparrows, Common Yellowthroats (heard), Yellow and Wilson’s Warblers, Barn Swallows, Brown-headed Cowbirds (one was a juvenile) and an inquisitive chipmunk.  I know Marion and Glen, who were behind us, had heard and seen some other species (see Marion’s comments below).

At the “Listening Bridge”, as in the past, Black-headed Grosbeaks posed very close to us; see some great shots on Flickr.  Also there, we saw a Steller’s Jay, more Brown-headed Cowbirds, Song Sparrows, and a Garden Gnome (turned out to be Gerhard, see photo).  Some idiot saw an Osprey which turned out to be a gull (I can say that if it was me…right?).  I don’t think anyone saw a raptor.  We spent quite a bit of time on the bridge/boardwalk with some attention paid to the vegetation.  The Hardhack Spirea, European Bittersweet (nightshade), Pacific Ninebark, Saint John’s-wort, and Tiger Lilies were all in bloom, and the Indian Plum plums were ripe for eating.  The Oregon Grape was a bit bitter yet.  Glen’s Huckleberries were not yet ripe.  (I know how Tom loves the botany aspect of the trips?)

When we got to the top of the steep trail to the Nature House area, I noticed some Swifts overhead… 4-5 of them.  I thought they were too small to be Blacks, and David, Brian and I went back and forth until Brian managed a  photo which seems to show that they were Vaux Swifts.  Brian and Terry have posted photos.  Whether Black or Vaux, they were my first Swifts of the year.  I think they were Vaux’s.

Having crossed to the west side of the river we made a left turn and followed the South Valley Nature Trail to the Nature House, which was closed and replaced by the Red Barn.  The Nature House (in the Red Barn) had an interesting set of “hands-on” activities and I think Jack may still be there looking for life in a drop of pond water!  There are a couple photos of the inside our DNCB Flickr site, including mounted Owls.

At this point, the group fragmented and spread out to the gardens, pond, fields and the Red Barn.  On the steep path up to the fields we saw a pair of Bewick’s Wrens having a dust bath, and some alert photographer managed a HD video of the event (modesty prevents me from mentioning his name).  Click on the photo below to see Roger’s video 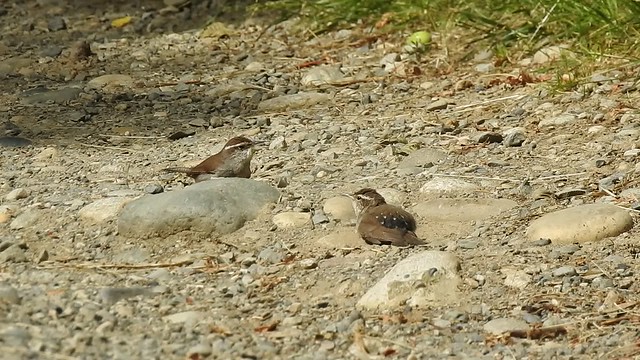 Glen mentioned having seen a Cassin’s Vireo in this area, and I hope he managed a photo!

From the Nature House we headed back to the parking lot via the west “Little River Loop” trail where many of us left for home, and others were talking about lunch.  I’m sure I’ve missed some of the birds sighted; hopefully others will send their lists.  See Map attached of the route we took, and Roger’s photos.

Marion’s Report:
The group got quite split up, and then split again at the pond area – here’s what we saw/heard.

The best was a Cassin’s Vireo that we heard only – he didn’t appear when we played the song, but he did spend quite a bit of time in the same area.  We had good looks at a Pacific Wren, Orange-crowned Warbler, Yellow Warbler, Cedar Waxwing, Swainson’s Thrush, Goldfinch, Cowbird fledglings, fleeting look at Pacific-slope Flycatcher, Hairy Woodpecker,  and Common Yellowthroat as it flew.

I believe the others in the larger group saw most of what we saw, so I won’t list any more – the pictures will tell the story.  We heard lots of flycatchers, Pacific-slope, Western Wood-Pewee, and also the occasional Willow.  Also heard many Wilson’s, but never did see one.  Douglas squirrels and chipmunks were out in full force.  Lots of common small birds, e.g. Towhee, Song Sparrow, Chickadee.

Glen said it best, as a description of the day, when he said “argghhh!  A cacophony!!! There were so many birds singing, and calling, that it was difficult to separate out sounds to listen for one bird!!”  This was such a pleasant change from what we have all been experiencing lately.  A good day!  Marion

Next Wednesday, July 4, we will leave Petra’s at 7:30 am for Surrey Bend Regional Park.

Check out our website for more info on this outing, and other reports and photos.  As always your comments are welcome, and let me know if these reports are annoying and you want off my email list.  Cheers: Tom

DNS: Delta Naturalists are a group of nature lovers whose aim is to foster interest in the natural history of the Fraser delta by sharing and enjoying nature and promoting environmental awareness and conservation. DNCB: Delta Nats Casual Birders is a group of Casual Birders who go Birding at different locations each week, usually within the Lower Mainland or in nearby Washington State.
View all posts by dncb →
This entry was posted in *DNCB, Campbell Valley, Cassin's Vireo, Cedar Waxwing, Douglas Squirrel, Orange-crowned Warbler, Pacific-slope Flycatcher, Swainson's Thrush, Townsend’s Chipmunk, Vaux's Swift, Western Wood-Pewee, Willow Flycatcher, Wilson’s Warbler, Yellow Warbler. Bookmark the permalink.