Twenty-three DNCBers enjoyed another glorious Wednesday morning wandering along the trails of Minnekhada Regional Park in Coquitlam.  Lots of beaut photos of the birds, bears, flowers, vistas, and people seen on this popular outing are on our Flickr site.

Ten of us car-pooled nicely from Petra’s at 7:30 am in three vehicles.  The hour-long drive following Mike B was smooth as we arrived at the Lodge parking lot at 8:35 am to the smiles of the horde of others waiting.  The big group (23) took some time for their obligatory bonding before we descended along the driveway to the Lookout for the also obligatory Group Photo. 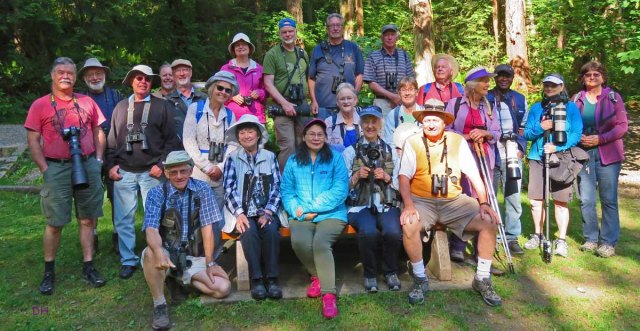 Pacific-slope Flycatchers and Wilson’s Warblers were singing everywhere in the Park.  Following David’s photo shoot, we decided to reverse our normal walk and start along the Fern Trail.  Not far along, we found the family of Sandhill Cranes in the marsh reeds just off the trail.  I think everyone eventually got a glimpse of the single tiny Colt following Mom very closely.

The group performed like expert birders because we heard and identified many species, including, Pileated Woodpecker, Black-headed Grosbeak, Black-throated Gray Warbler, Pacific, Bewick’s & Marsh Wrens, Warbling & Cassin’s Vireos, Brown Creeper, and Red-breasted Sapsuckers but didn’t actually see them.  While distinctly hearing and searching for the Pacific-slope Flycatcher and the Wilson’s Warbler, a Swainson’s Thrush surprisingly landed in my binoc’s view.  It found me, I didn’t find it. Nonetheless, a nice sighting.  Some did eventually see a Pacific-slope Flycatcher, Wilson’s & Orange-crowned Warblers, and Bushtits.  Our biologists identified the several Fern species along the trail, and Glen saved a cute miniature frog from being trampled.

We got close to the off-shoot trail to Low Knoll lookout when someone spotted a Black Bear.  The Bear crawled onto the trail, then meandered past us down to where we had come.  Of course, we were cautious, but this juvenile, probably a year or two old, was seemingly not concerned about us, just sniffing its way along the trail.  We left the Bear to his wandering and we continued climbing to the Lookout.  (“Minnekhada Encounters” video by David Hoar has Sandhill Cranes w. colt, then Black Bear footage)

The view from the Lookout was magnificent.  Few birds, but still awesome.  An Anna’s Hummingbird posed, and some saw the pair of Western Tanagers high in the tree tops.  The descent along the Mid-Marsh trail seemed easier than our other visits here.  In the Upper Marsh we saw a Pied-billed Grebe, Wood Ducks, perhaps a Merganser, but mostly just Canada Geese and Mallard families, and the photogenic Great Blue Herons.  We didn’t see the other Sandhill Crane, but heard it calling to the family we had seen earlier in the Lower Marsh.  Lots of Tree, and a few Barn Swallows around.

We followed the Lodge Trail back on the other side of the Lower Marsh.  Lots of Common Yellowthroats around, and the regular Sparrow and Finch species and Red Slider Turtles.  We were blanked on Roger’s Townsend’s and MacGillivray’s Warblers.

It was 11:30 am when we got back to the Lodge.  Begrudgingly, I left for home and grand-parent duties while the group continued on to the new nearby Blakeburn Lagoons Park.  They saw nesting Killdeer here before going to lunch (16 dined) at the Arms Pub in Port Coquitlam.  Mike B was ecstatic with the Steak & Spaghetti lunch with two Guinness pints.

After my directionally-challenged drive home via Port Moody, Burnaby and New Westminster, and Juliette’s gymnastics, Sandra and I ate Steak Pho at the new Vietnamese Phamtastic Pho restaurant in Ladner.  Delicious, but no liquor licence.

All in all, it was another fantastic DNCB outing.  The 23 were: Roger & Terry who did a tonne of the organizing, David & Noreen, Burnaby Roy & Solveig, sisters Pat & Maureen and Manli, Marion & Kirsten, Ladner Jack, Tsawwassen Glen, Richmond Brian, VanCity Lidia, North Delta Liz & Alan, PB Lorna (Thanks again for the sandwich), Boundary Bay Valerie, Mike B & Mike B2, returning DNCB veteran New Westminster Jonathan, and me.

For more info on this outing, and other reports and photos, visit our website.

As always, your comments are welcome, and let me know if these long-winded, weekly tirades give you grief and you want off my email list.  Cheers: Tom