DNCB Outing No. 2018-11 Birds on the Bay in Boundary Bay Regional Park

Twenty folk enjoyed another brilliant Wednesday morning on our quarterly Birds on the Bay outing in Boundary Bay Regional Park.  We saw some neat stuff, including tonnes of shorebirds and waterfowl.  Check out the photo evidence on our Flickr site at: DNCB Flickr website.

We met at historic Cammidge House and left at 9:00 am on our 2 ½ hour amble through the Park.  Terry took the first Group photo while I briefed them on the scenario of today’s outing.

Meanwhile, a posing Cooper’s Hawk in the back tree started us off in grand style.  We had six Newbies on this outing, including five Interpreters with Nature Vancouver Parks.  I mention the five interpreters not only because they brought youth, vitality and “good eyes” to the outing, but also because they shared responsibility for carrying our Scope, an integral part in ensuring the success of the outing.  Thanks Miki, Adria, Sam, Meghan and Sara. 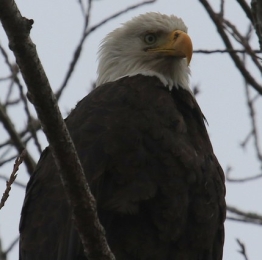 Bald Eagles, Northwestern Crows and Red-winged Blackbirds were everywhere as we walked along the driveway toward the native plant garden beside the pond behind Centennial Beach.  Only Mallards and American Wigeon (no Eurasian Wigeon today) in the pond. 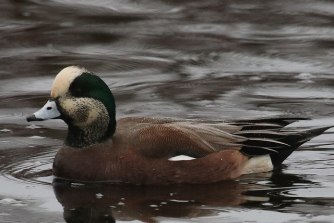 We are fairly certain there were Brewer’s Blackbirds among the Redwings and Starlings.  At the beach, the tide was in, but receding.

Small flocks of Dunlin and Sanderling were feeding close to shore.  In the distance were several large rafts of waterfowl; we could identify shapes of Scaup, Scoters and Brant Geese.

Between the shore and the rafts were other birds which we saw more clearly through the scope; Common Loons, Bufflehead, Double-crested Cormorants and several Common Goldeneye.  I even saw a male Goldeneye doing his neck-wrenching mating behavior.

We left the beach to follow the path toward the Lookout.  We were hoping to see some early warbler migrants but lucked out.  We saw most of the “regulars”, Spotted Towhees, Juncos, Sparrows (Song, Fox, Golden-crowned), Anna’s Hummingbirds, Northern Flickers and a Downy Woodpecker. 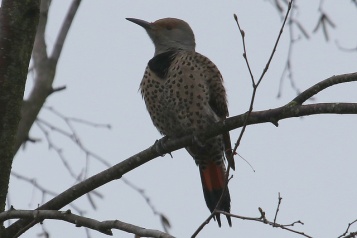 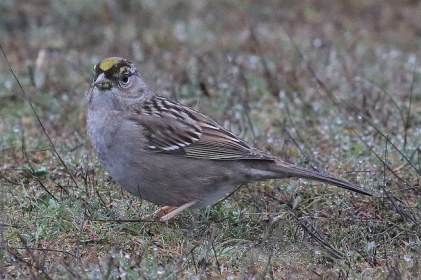 A couple of Northern Harriers gave flypasts; too early for their mating rituals.  David H took the second Group Photo at the Lookout.

BOTB at the Lookout – photo by David Hoar

Following the dike path toward the Pumphouse, the Green-winged Teal (we couldn’t find a Common Teal) were feeding in the muddy area where we normally see Killdeer.  There was a Greater Yellowlegs there too (up-turned bill, longer than head).

I pointed out our Delta Nats Bird Boxes (outing to prepare them for occupancy is this Sunday, March 18).  Early-arrived Tree Swallows (not expected until Mar 27) have already been seen scoping out our boxes.  At the Pumphouse Lookout were tonnes of Gulls; Roger identified Mew and Ring-billed among the Glaucous-winged.  Flocks of Brant Geese, Northern Pintail and Lesser Scaup were closer for good looks too.

We took the inland path back to Cammidge House, stopping to show off our new Barn Owl Box, DNS No. 17, just off the Raptor Trail.  This “Cadillac” BO Box even has two cameras for connecting to i-phones to look inside without disturbing the occupants.

Continuing on, some saw Marsh Wrens, and some brilliantly-coloured House Finches, but nothing else unusual.  Fortunately, the normal chatfest among participants kept everyone happy, despite the shortage of exciting sightings. 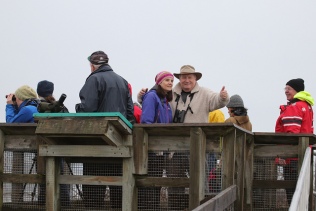 We got back to Cammidge House at exactly 11:30 am, the sun was shining, and the Delta Nats Ladies were there to welcome us.  Jennifer, Rochelle and Elizabeth had prepared their elaborate selection of home-made goodies including Scones, Ginger cookies, cakes, cheeses, fruits, etc., plus Sandra’s famous Egg Salad Sandwiches.  I know many participants feel this is the hi-lite and main attraction of these quarterly BOTB outings (Mike who?).  As I rushed out at 11:50 am to my Wednesday Noon hockey, a Red-tailed Hawk posed in the same spot as where the Cooper’s Hawk posed at 9:00 am.  A fitting ending to another enjoyable DNCB BOTB outing (don’t you just love initials?).

Next Tuesday, March 20, we will meet at and leave from Petra’s at 7:30 am for Stanley Park.  We plan to meet others at 8:15/8:30 am at the Swimming Pool parking lot (Second Beach), dependant on traffic.

Check out our website for more info, reports and photos.  As always, your comments are encouraged, and let me know if you want off my list to receive these rambling, tedious missives.  Cheers: Tom

DNS: Delta Naturalists are a group of nature lovers whose aim is to foster interest in the natural history of the Fraser delta by sharing and enjoying nature and promoting environmental awareness and conservation. DNCB: Delta Nats Casual Birders is a group of Casual Birders who go Birding at different locations each week, usually within the Lower Mainland or in nearby Washington State.
View all posts by dncb →
This entry was posted in *DNCB, Bald Eagle, BBRP, Birds-on-the-Bay, Centennial Beach, Cooper's Hawk, Dunlin, Mew Gull, Northern Harrier, Red-tailed Hawk, Sanderling. Bookmark the permalink.