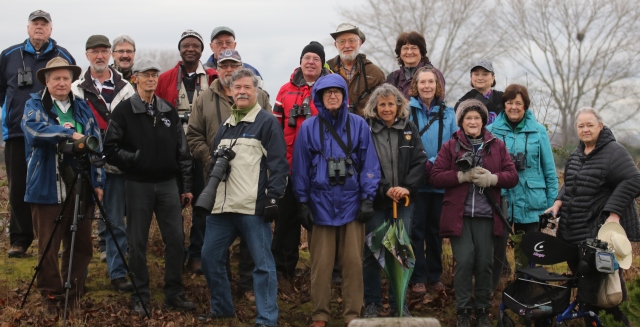 Photos on our Flickr site at: www.flickr.com/groups/dncb, then click the magnifying glass icon in the “Photo Pool” row, and add 2018-06 to “

My Beef Dip was fine, and the two Red Truck IPA pints were okay, but I prefer crappy lager.

Next Tuesday Feb. 13 DNCB goes to Blaine; leave Petra’s at 7:30, carpool from the Peace Arch Park parking lot (behind the border Duty Free) at 8, meet at Blaine Marine Park around 8:15 am.

DNS: Delta Naturalists are a group of nature lovers whose aim is to foster interest in the natural history of the Fraser delta by sharing and enjoying nature and promoting environmental awareness and conservation. DNCB: Delta Nats Casual Birders is a group of Casual Birders who go Birding at different locations each week, usually within the Lower Mainland or in nearby Washington State.
View all posts by dncb →
This entry was posted in *DNCB, Bald Eagle, Hooded Merganser, Iona, Northern Harrier, Northern Shrike, Red-tailed Hawk, Red-throated Loon, Ring-necked Duck, Sewage Lagoons, Trumpeter Swan, Western Meadowlark. Bookmark the permalink.