A dozen hopeful DNCBers spent the shortest DNCB outing ever at Iona on Tuesday/yesterday.  It was windy and pouring rain; check out Ladner Jack’s and David H’s photos on our Flickr site at: www.flickr.com/groups/dncb, then click the magnifying glass icon in the “Photo Pool” row, and add 2018-04 to “

I drove to Iona, arriving at 8:05 am, the sole person there, and there were no birds in the bay or in the air, very eerie (Tsunami-like premonition).  It was windy, cold and blowing rain.  But I had my new Christmas rubber shoes, insulated socks, wet suit and was ready, I thought.  Marion & Marti arrived and immediately said they were going home.  Johnny Mac was dazed and went to recover in the washroom.  The two Petra’s carloads of Mike B with Terry & newbie Mike 2B and David & Noreen with Glen & Ladner Jack arrived about 8:15 with wry smiles or snarls on their faces.  The common thread was: “What the hell are we doing here on a day like this?”  After more inane chatter, I suggested we should just go to the Flying Beaver for breakfast.  There was an eruption of joy.

Before leaving, Glen took the obligatory Group Photo under cover of the washroom building, without Richmond Brian who arrived shortly after.  I walked to the beach and saw a huge flock of Snow Geese huddled together on shore.  Ladner Jack took photos.

There were also some Mallards, Wigeons and Great Blue Herons hunkered down in the bushes.  Still, no birds on the water or in the air, other than a couple of Glaucous-winged Gulls.  It was miserable.

On driving out, the wind died down a bit.  We saw Northern Pintails, Green-winged Teal, Bufflehead and a couple of Gadwall slowly leaving shelter on shore into the weedy water.  The tide was very high.  Several saw the “tagged” Rough-legged Hawk, a Red-tail and Northern Harrier either on the way in or out.

We got to the Flying Beaver before it opened at 9:00 am.  Liz and Tina were very accommodating to serve us early coffee as we warmed up.  My breakfast of Steak & Eggs was awesome (too early for beer, although I thought about it). 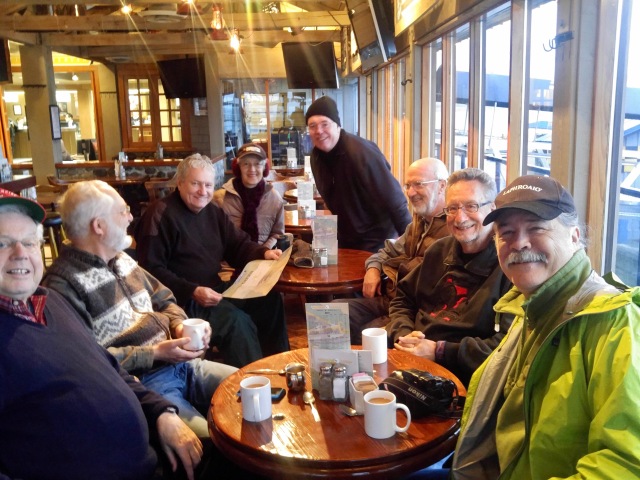 The chatfest was fun as I got to share some “interesting” experiences about my holiday in Cuba last week.  Wimp Roger, who bailed on us, in his absence was complimented on last week’s Serpentine Fen outing Report.  Sandra was surprised to see me at home by 10:00 am.  It may have been the shortest DNCB outing, but still a tonne of fun with some really nice civilized folk.

Next Tuesday, January 30, we will leave Petra’s at 7:30 am for an outing in Point Roberts, USA.  We will meet at the Marine Lighthouse Park parking lot around 8:00 am.

For more info, reports and photos, check out our website.  As always, your comments are encouraged, and let me know if this drivel annoys you and you want off my e-mail list.  Cheers: Tom

DNS: Delta Naturalists are a group of nature lovers whose aim is to foster interest in the natural history of the Fraser delta by sharing and enjoying nature and promoting environmental awareness and conservation. DNCB: Delta Nats Casual Birders is a group of Casual Birders who go Birding at different locations each week, usually within the Lower Mainland or in nearby Washington State.
View all posts by dncb →
This entry was posted in *DNCB, Iona, Northern Harrier, Red-tailed Hawk, Rough-legged Hawk. Bookmark the permalink.