About 19 DNCBers enjoyed a pleasant and productive Tuesday morning travelling to and from, and at Reifel Bird Sanctuary.  Check out the brilliant photo evidence of our first 2018 outing on our Flickr site at: www.flickr.com/groups/dncb, then click the magnifying glass icon in the “Photo Pool” row, and add 2018-01 to “

We (12) car-pooled nicely from Petra’s at 7:30 am to our first stop along the causeway to the Tsawwassen Ferry terminal.  There was a glorious sunrise over English Bluff that photographed beautifully. 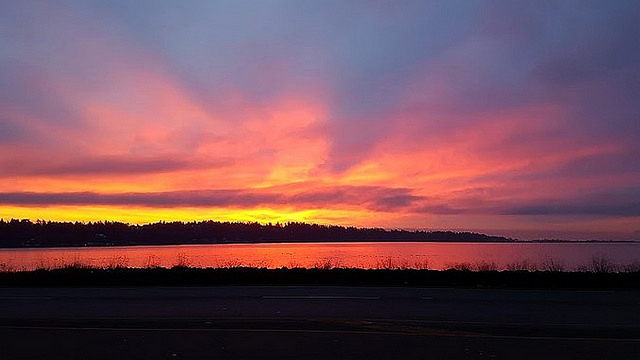 Sunrise over Tsawwassen, by Jim K

And the Bay had thousands of ducks on both sides of the highway.  Mostly American Wigeon, Mallards, Northern Pintail, Green-winged Teal, Bufflehead, Common Loons, Northern Shoveler, Horned Grebes on the DeltaPort side, and “Divers” on the Tsatsu Shore side such as Surf and White-winged Scoters and Common Goldeneye.  Lots of Cormorants too, Double-crested and Pelagic; we tried to make a Pelagic into a Brandt.  I couldn’t find a Black Scoter, and we didn’t see any little northern birds like Snow Buntings or Horned Larks.  Black Oystercatchers were on both sides, and a few Harlequins were near the terminal.  The tide was high so we only saw a few small flocks of Dunlin fly by.

We left the Terminal and drove through the TFN land.  No Belted Kingfisher at the Kingfisher Bridge, but a Red-Tailed Hawk was on a telephone wire, and a pair of Bald Eagles on the hydro tower looking at the empty Heron colony.  Several Northern Harriers over the marshes, and a cock Ring-necked Pheasant was along the road.  The TFN have done some nice work on the marsh protecting and improving the habitat yet making it sort of accessible to us birders.  Some also saw a Merlin and a Rough-legged Hawk on the drive through the TFN and Ladner fields.  We drove right by a guy looking at Robins at 34th & 33rd.

We got to Reifel around 9:20 am where a Sharp-shinned Hawk landed in a tree above the parking lot.  Aussie Nance, and later Laura S, and the “ghosts” Ken & Anne were there too.  David took our Group Photo, without time-challenged Margaretha and her lively granddaughter Teala, at the Snow Goose sign with Reifel’s Dan front and centre.  Dan sadly recounted the story of the juvenile orphan Sandhill Crane brought from Vancouver Island that did not survive after two weeks with the local cranes; found frozen to death.

Reifel is our DNCB Mecca where we come to see birds up-close-and personal.  It did not disappoint on Tuesday.  Wood Ducks were in brilliant plumage.  Lots of Ring-necked Ducks and American Coots too along with all the “regular” species.  The trails were filled with little birds; Sparrows (Song, Fox, Golden- and White-crowned), Spotted Towhees, Dark-eyed Juncos.  Some saw Golden-crowned Kinglets, but no warbler species this day. Four Black-crowned Night Herons were roosting in their spots.  The elderly youngsters enjoyed hand-feeding the Chickadees, Red-winged Blackbirds and Sandhill Cranes.  We were blanked on Saw-whet Owls, Virginia Rails (heard) and Wilson’s Snipe (seen by Dan).

At the Tower, lots of Trumpeter Swans were in the Bay.  A flock of Snow Geese flew over, but it seems that most of the Westham Island flock have moved to Skagit Valley in Washington as they normally do for a month or two at this time of year.  There wasn’t much open water in Reifel (mostly frozen), so we didn’t see any Dowitchers, Plovers or Yellowlegs.  Several Northern Flickers and Downy Woodpeckers made appearances.  Anna’s Hummingbirds were at the Reifel feeders.  Approaching 11:00 am we decided to go next door to Alaksen CWS Pacific Region offices to check on the Barred Owls.

A photogenic Barred Owl was posing in the driveway Cedars, just as Margaretha had directed to us.  Terry saw a Brown Creeper too, but we couldn’t re-locate it.  At 11:30 am, following negotiations, we decided to go to Speed’s Pub in Ladner.  That did not disappoint either.  The unusual, to me, Wild Coho Salmon Fish & Chips was delicious, along with two pints of Canadian.  But the outing did not end here!

On the drive back to Tsawwassen, we decided to stop at 33A Ave and 34th St where we earlier saw the guy and the Robins.  White Rock Carlo was there, and we almost immediately spotted the Bohemian Waxwing for him.  That was our Bird of the Day!  We also stopped near the new TFN warehouses being built to check out several Buteos.  One close-up and posing one was a Rough-legged Hawk that Chris and Jim got good shots of.  Another splendid DNCB outing!

Next Tuesday, January 9, we will go to White Rock pier, then Blackie Spit Park.  We expect to meet others at the White Rock Pier (free) parking lot around 8:15 am.

As always, your comments are encouraged, check out our website for more info, reports and photos and, please let me know if these weekly rambling and uninteresting reports annoy you and you want off my email list.  Cheers: Tom