About 18 Delta and Squamish Naturalists had a grand Wednesday morning wandering the trails and wetlands of the Squamish estuary.  It was a new and interesting destination for DNCBers and we met some nice new folk.  Check out the photo evidence on our DNCB Flickr site at: www.flickr.com/groups/dncb, then click the magnifying glass icon in the “Photo Pool” row, and add 2017-38 to “

Four of us (Glen, Terry, Johnny Mac and me) left the Ladner Bus Exchange at 6:30 am and had a leisurely and surprisingly very smooth 1 ½ hour drive through Vancouver to the Howe Sound Brew Pub in Squamish.  I guess we beat the rush hour traffic.  We met my “Trinidadian” friend Larry Murray and his smiling band of Squamish birders (Vanessa, Patrick, Marcia, Marilyn and Hilary; I may have the wrong names) at the Pub, along with DNCBers Richmond Bill D, North Van’s Richard H, Lidia, sisters Pat & Maureen, Marion, Marti and Kirsten.

After introductions and renewing acquaintances, Larry and Vanessa led us along the path toward the estuary.  The scenery was magnificent as we looked up at the Stawamus Chief, Mt. Garibaldi, and Black Tusk where Roger, who deserted the DNCBers, was climbing this morning.  Although the chatting was indefatigable, we did see a few birds along the trail, including sparring Song Sparrows, White-crowned Sparrows, several Northern Flickers, Steller’s Jays, House and Purple Finches, Crows and Common Ravens, and other common stuff.  Glen posted a photo of a Savannah Sparrow (originally mistaken for a White-throated).

When we got to the estuary, after taking the mandatory Group Photo, we split into two groups to circle the trail portion and meet on the railroad tracks.  The tide was low and the weather was simply perfect.  While following the tracks, our group met a flock of Long-billed Dowitchers that posed nicely for us in a marsh pond.  The other group had a Black Bear cross the tracks right in front of them.

We met up after an hour and together we entered the trails through the wetlands, which Larry said were probably made by the early settlers 200 years ago, cultivating Hops.  Of course the area had been traversed, fished and inhabited by Squamish First Nations for 5000 years, and in 2007 the land was declared a Squamish Estuary Wildlife Management Area.  Some interesting sightings through these narrow “rooted” trails included a few Common Mergansers, raft of American Wigeon, pair of Belted Kingfishers, a kettle of Turkey Vultures, Brown Creeper.  Some heard Common Yellowthroats, Red-breasted Nuthatches, Kinglets and both Marsh and Pacific Wrens, but I didn’t see these.  We probably saw other neat stuff too, but I forget.

The walk through the trees and even on the mud of the estuary was fun too.  A huge Sitka Spruce tree with a big “burl” (i.e. deformed growth at the base of the tree) on it was interesting.  It was approaching 11:00 am, when Pat fell, fractured her ankle, and had to be fireman–lifted (thanks Larry & Patrick) out of the park to a waiting ambulance that Glen had called.  Later, Terry drove Pat & Maureen home from the Squamish Hospital, and Pat is currently “using a Walker” and hoping to have surgery tomorrow or Monday at the Royal Columbian Hospital.  Our first, and hopefully last, accident on a DNCB outing.  It’s not true that Pat fell because she was desiring attention.

While Pat was enjoying herself in the Squamish Hospital (X-rays confirmed ankle fracture), the rest of us went for lunch at the Brew Pub.  The Soup & Chicken Pot Pie Special with a jug of their Belgian style Lager, along with a couple of Larry’s delicious Calamari, hit the spot. 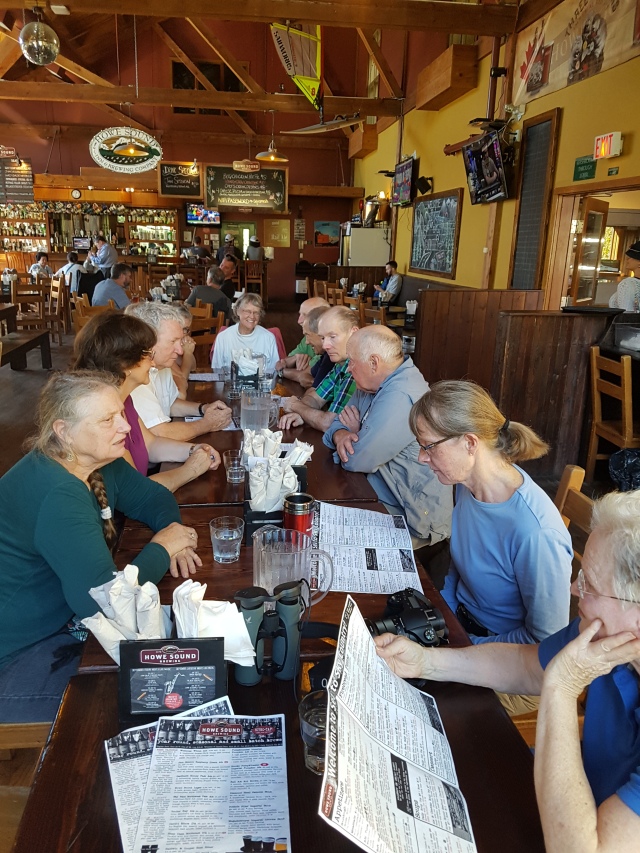 Like Delta Nats, the Squamish Environment Society is a member of BC Nature, and you can learn more about them on their website at: www.squamishenvironment.ca.  Thanks to Larry and his Squamish birders, we really enjoyed an informative, interesting and fun morning with our new friends.  My vehicle, without Terry, left the pub at 2:00 pm and got back to Ladner at 3:30 pm, a super smooth and surprisingly quick ride over the Lion’s Gate Bridge and through Vancouver.  I think Johnny Mac slept all the way, and fortunately Glen’s historical conversation kept me awake.

Also on Tuesday October 3 is our Delta Nats monthly meeting and AGM, with Ken Hall presenting on “Water in the Desert”.  Join us (free) at 7:30 pm at the Benediction Lutheran Church for a very enjoyable evening.

For more info on our DNS Meeting guest speaker and his topic, our DNCB outings and other Delta Nats stuff, check out this website.  As always, your comments are encouraged, and if these rambling missives annoy you, let me know and I’ll remove you from my email list.  Cheers: Tom

DNS: Delta Naturalists are a group of nature lovers whose aim is to foster interest in the natural history of the Fraser delta by sharing and enjoying nature and promoting environmental awareness and conservation. DNCB: Delta Nats Casual Birders is a group of Casual Birders who go Birding at different locations each week, usually within the Lower Mainland or in nearby Washington State.
View all posts by dncb →
This entry was posted in *DNCB, Black Bear, Brown Creeper, Long-billed Dowitcher, Purple Finch, Squamish Estuary, Turkey Vulture. Bookmark the permalink.