At 7:00 AM this morning in Ladner there was monsoon rain and the prospects for birding looked pretty dim.  However the Petra’s group of four, Mike, Val, Terry and Glen, felt that it looked good and off they went to the Point where they met a surprising number of others who don’t know to come in from the rain!  Present at the start were the afore-mentioned, Roger (having lost the “who will write the blog contest”), Donna, Patrick, Jack, Brian, and Marylile.  Shortly into the walk Roy, Solvag, Pat and Maureen arrived from Burnaby having taken a great chance on the weather to come all that way.  Much later on we were joined by Margaretha (or  was she just really early for lunch?).

Right from the start we had over-flights of thousands of Snow Geese and accompanying sounds of shotgun blasts from the fields.  On the river we saw a single Horned Grebe and the pilings for the old cannery hosted a flock of Black-bellied Plover.

Also on one of the pilings was a Pectoral Sandpiper and a small peep, possibly a Least.  Several Greater Yellowlegs were on a small islet of grass just off the shoreline.  While we were watching the plovers a Bald Eagle grabbed a bird (black… possibly a Cormorant) out of the river and proceeded to eat it on a log on the opposite shore.

There were several Double-crested Cormorants on the water.  Smaller birds along the way included Ruby-crowned Kinglet, Golden-crowned Sparrows, a single Fox Sparrow, Savannah Sparrow, a Spotted Towhee, Northern Flicker, numerous American Robins, and Starlings.  We made no attempt to identify the gulls, probably Glacous-winged, flying about. 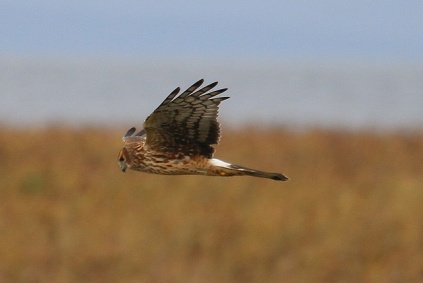 Walking along the dyke we saw several Northern Harriers over the marsh, most near the shoreline.  A bird on top of a tree turned out to be a Northern Shrike but flew before photos could be taken.  This bird continued to taunt us all the way to the picnic table area but we did managed some good photos by the end of the trip. 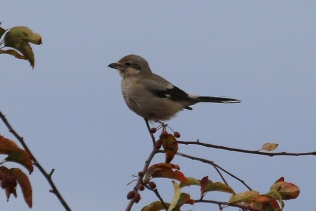 We were pretty sure there were at least two of them.  Eagle-eyed Donna spotted a family of Western Meadowlarks and most of us managed to get some good photos. 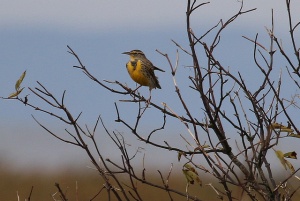 At one point on the dyke a falcon (Peregrine was the consensus) chased a flock, and then one bird, for a long way before disappearing towards Reifel… outcome not known.  Flocks of Sandpipers were seen over the shoreline and when one flock stopped on a log we were able to confirm that they were Dunlin.  Offshore there was a large flock of Snow Geese and large numbers of ducks we were not able to identify from their long distance out… definitely some Mallards though. 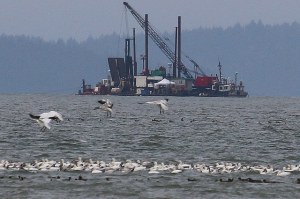 Just before the path leading off the dyke to the picnic tables we had our best view of the Northern Shrike.  In the rose bushes close to the picnic tables we were, with some difficulty, able to identify two, at least, Ruby-crowned Kinglets.  There were large numbers of American Robins just about everywhere on the trip, many Eurasian Collard-doves, and frequent Great-blue Herons.

Although the weather looked iffy it only started to sprinkle a bit when we were almost back at the cars.  Visitors to Brunswick should pay attention to the new parking regulations before heading out for a long walk.  The trip turned out to be more rewarding than anticipated and some of the group headed out for an early lunch.  I hope photographs were taken, especially with beer in hand, for Tom to envy while away… oh, wait a minute, I think they have beer and birds in Australia!  Hope you’re having a great time with the birds down under, Tom.  (see Response from Australia below).  Sorry for the lackluster report but we’ll try to find a better victim next week.

Next Wednesday 25th October we will meet at Petra’s at 7:30 am for our regular outing to Reifel passing by the ferry terminal, TFN lands, and then to Reifel for a 10:00 AM meeting with the Pender Island birders.

Response from Australia:  What an awesome report, Roger.  Lots of super sightings, and a fun group too.  You have set a high level of literary genius, so I hope you’re successful in recruiting future reporters.

Meanwhile, it is 8:00 am on Wed. Morning here and I am watching gorgeous Splendid (Fairy) Wrens in our yard, as I gaze out at sunrise over the calm Indian Ocean.  I golfed yesterday and enjoyed the common Red Wattlebirds, New Holland Honeyeaters, Galahs and Magpie-larks, but was surprised by a flock of endangered Red-tailed Black Cockatoos (Carnaby).  Lunch was a huge “loaded” steak sandwich and chips with two pints of Swan Lager (draught) in a real Aussie Pub called Nag’s Head (15 bucks, no tip or tax).  A very enjoyable day, but I wish (sort of) that I was with you guys.  Enjoy next week’s outing with the Pender Island Naturalists.  DNCBers are awesome.  Cheers: Tom

DNS: Delta Naturalists are a group of nature lovers whose aim is to foster interest in the natural history of the Fraser delta by sharing and enjoying nature and promoting environmental awareness and conservation. DNCB: Delta Nats Casual Birders is a group of Casual Birders who go Birding at different locations each week, usually within the Lower Mainland or in nearby Washington State.
View all posts by dncb →
This entry was posted in *DNCB, Bald Eagle, Black-bellied Plover, Brunswick Point, Dunlin, Least Sandpiper, Northern Harrier, Pectoral Sandpiper, Peregrine Falcon, Western Meadowlark. Bookmark the permalink.