Delta Nats: Your fantastic DNS Display Team had our hands-on, educational and very popular Display at two events this past weekend.  We participated in Metro Vancouver’s annual Starry Night at Deas Island Park on Saturday evening, August 20, then again on Sunday, August 21 in the annual Ladner Animal Expo at Memorial Park.  The weather was super and both events were well attended, although I think both had fewer attendees than last year.  Tonnes of adults and kids visited our booth; check out Terry’s photo evidence at:  https://goo.gl/photos/QfaYXLdxrrBaWkfv8.  Roger’s, Marylile’s and other’s photos will be on our DNCB website once Webmaster Ken posts this report.

Starry Night at Deas Island Park (Saturday 20 August)
At 5:45 p.m. on Saturday evening, Display Team Coordinator Terry Carr, along with the always-dependable Roger Meyer and Mike Betts, loaded our exhibit stuff from our locker at Centennial Beach into Roger’s van.  They set up our Nats tent in our regular spot in Deas Island Park, with four tables of material, plus two smaller tables behind. 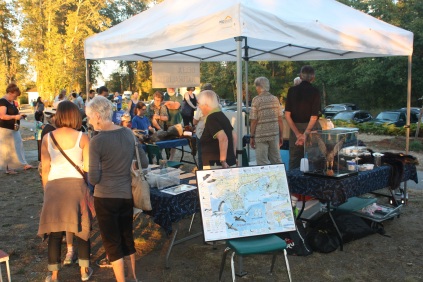 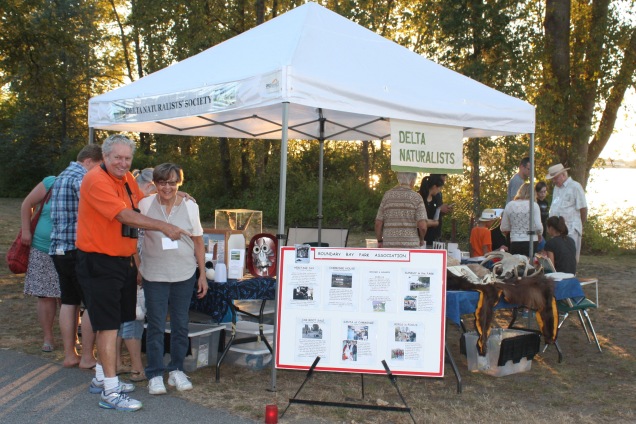 The exhibit material on the four tables was arranged masterfully, with some new and improved material, thanks in large part to Terry and Marylile.  We had lots of Volunteers showing and explaining stuff to the visitors.  Joyce & Boudi did yeoman service at both events.  Marian P, Mike B and Donna T were awesome, too, entertaining the public. 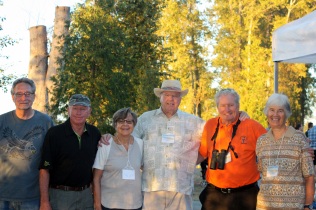 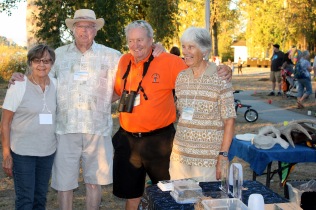 The two smaller tables behind our Nats tent were for colouring and our new “Vomit Exhibit”.  Interestingly, the Colouring Table was not only popular for the kids, but several adults spent 20-30 minutes sitting there colouring owls and other species we offered.  Apparently Adult Colouring is a new fad.

However, our Nats “Featured Performance” was Roger cutting up Owl Pellets at the Vomit table.  He was surrounded for hours by kids and adults, fascinated with his demonstrating, and their participation, in dissecting these pellets. 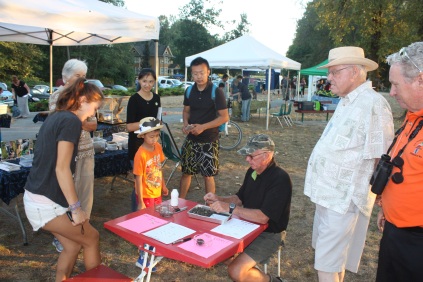 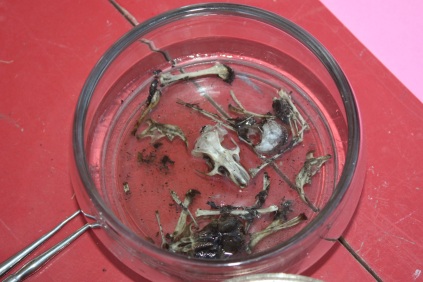 MV Parks staff were even intrigued with one of Roger’s pellets that contained a shorebird/sandpiper skull and bill.  I think our Booth was the most popular of all at Starry Night.  And we even saw a few Bats at sunset, leaving the attic of the historic Raymond Burr House.

Ladner Animal Expo at Memorial Park (Sunday 21 August)
On Saturday, around 9:00 a.m. Roger, Mike and Terry again unloaded the exhibit material from Roger’s van at Memorial Park for the Animal Expo, around the same spot where we set up last year.  Our Display wasn’t quite as large as the night before, but no less interesting, educational and fun.

While I was there, there was a steady stream of visitors, and they all seemed impressed and intrigued with our exhibits.  Our enthusiastic Nats Volunteers, namely Val, Anita, Joyce & Boudi, Marylile & Rob and our Animal Expo liaison Elizabeth, continuously regaled our visitors with brilliant commentary that elicited smiles and gasps of amazement.  Some kids enjoyed our Colouring Table too, despite being surrounded by a bunch of Dog Houses, part of our neighbouring booth’s Paint a Dog House Competition.  Margaretha brought her delicious homemade Plum Pastries to treat the late shift Volunteers.

Around 3:30 p.m., we tore down the Display in quick and organized fashion and loaded it into Roger’s van.  He and Mike returned it to our Centennial Beach locker.

These were two very successful events where I felt very pleased and proud to be a Nat.  Our Display is first class with its variety of nests, bones, skins, artifacts, posters, photos and hands-on stuff that entertain and educate kids and adults.  And our Display Team of Volunteers led by Terry and Marylile is Top Class.  Like me, I think other Nats volunteers get a nice feeling of accomplishment after serving at these events.  The promotion of Nature Education is an important aspect of our Nats club.

Our next event is the Richmond Raptor Festival on Sunday, August 28 and our final 2016 event is Day at the Farm on Sunday, September 10.  Hope to see more Nats participating.

DNS: Delta Naturalists are a group of nature lovers whose aim is to foster interest in the natural history of the Fraser delta by sharing and enjoying nature and promoting environmental awareness and conservation. DNCB: Delta Nats Casual Birders is a group of Casual Birders who go Birding at different locations each week, usually within the Lower Mainland or in nearby Washington State.
View all posts by dncb →
This entry was posted in *DNS, Animal Expo, Deas Island, Memorial Park, Starry Night. Bookmark the permalink.