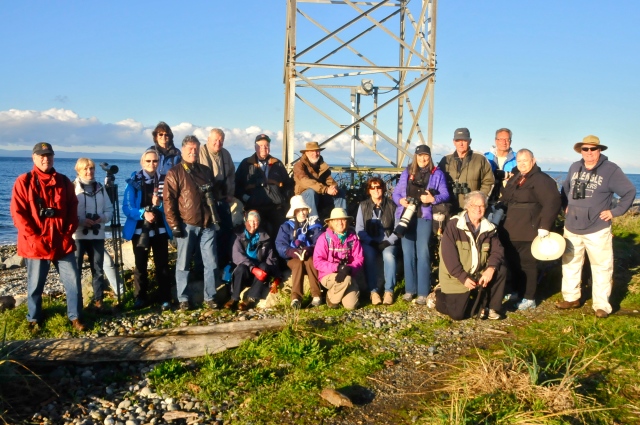 A cast of thousands (actually 27, see names at end) enjoyed another gorgeous Tuesday morning (yesterday) of birding in Pt. Roberts, USA.  It was a banner morning, but you will have to read to the end of this exhausting epic to learn the species seen (~65), some rare, and/or check out the photo evidence on our DNCB Picasa site.

Twelve of us left Petra’s at 7:30 a.m. in 5 vehicles and went through a very smooth Border to meet at Lighthouse Marine Park at 8:00 a.m.  Car-pooling was virtually ignored; with the gas price at a bargain US $0.629 per litre, we had as many as 18 vehicles in our convoy at times during the day.  The tide was high, the water calm, and sun shining brilliantly, unusual but very welcome in November.  Red-necked Grebes, Common Loons, both Pelagic and Double-crested and Pelagic Cormorants (probably Brandt’s too) and Surf Scoters were diving close to shore.  We meandered along the path toward the “lighthouse” and saw Red-breasted Mergansers and White-winged Scoters.  Interestingly, at the lighthouse we saw Horned and Western Grebes, and Black Scoters fly by to complete the 3 Grebe and 3 Scoter species seen.

From the Lighthouse, although we only had two scopes, Ken’s and our “weak” DNS scope, we had a utopia of bird, and Steller Sea Lion, sightings.  Beautiful Harlequin Ducks were close to shore.  Among the Gulls, mostly Glaucous-winged, out further were several Common Murres and Pigeon Guillemots (no Rhinoceros Auklets).  Flocks of Bonaparte’s Gulls were cruising there too and some identified Mew and California Gulls.  We got several photos of orange-billed Heermann’s Gulls that have not yet gone south.  We were blanked on seeing any Terns or Jaegers, seen on past visits here at this time.  Anne saw a Marbled Murrelet and a Pacific Loon.  Flocks of Canada and Snow Geese flew over and we saw Brant Geese too (no Trumpeter Swans, but they have arrived).  A Black Oystercatcher flew by as did a nice flock of Sanderlings; some saw Dunlin.  Black Turnstones foraged in the stones in front of us.  We did not see the Surfbird, but Anne found it here when she returned in the afternoon.  We did not see the Whimbrel either, but Tall Rick reported it seen across the bay at the Tsawwassen Ferry Terminal that afternoon, with a Ruddy Turnstone.

With the usual annoying corralling, Ken took the obligatory Group Photo (18 with 9 time-challenged not included) at the Lighthouse, with the brilliant sun in our faces.  Then we walked further south along the shore.  Lots of Greater Scaup seen, and probably Lesser too.  We took the inland park trail back to the parking lot but didn’t see much in the bushes, other than common stuff such as the four Sparrow species, Song, White- and Golden-crowned and Fox, heard a Bewick’s Wren.  Northern Flickers and Downy Woodpeckers were around.  We convoyed in umpteen vehicles along Marine Drive/Edwards Drive toward the Marina, stopping at the “pond on the left”, where a large flock of elegant Hooded Mergansers caught our attention, males with their hoods up in full view.  Buffleheads, American Wigeon and Mallards were also in this pond and a Red-tailed Hawk was perched overlooking the ducks.

At the Marina, we gathered before walking to the rocky shore.  Four beautiful Western Meadowlarks welcomed and escorted us to the water.  More Harlequins, Scaup, Scoters and Grebes at the marina entrance and we searched the rocks in vain for our Target Bird, the rare Rock Wren.  Surprisingly, while watching the flock of Black Turnstones, Terry spotted a Snow Bunting join them.  This bird hung around and everyone got good looks and photos.  A couple of Killdeer joined the group too, while the noisiest pair of Belted Kingfishers ever surrounded us.  House Finches and more Sparrows seen here, including a Lincoln’s Sparrow.

Approaching 10:30 a.m. and being impatient, we left the Marina and convoyed to Lily Point Park.  The very patient Kirsten stayed and finally saw the Rock Wren around 12:30 p.m., interestingly posing on a rock where a number of our photogs were sitting earlier.  Anne & Ken watched a magnificent stag in a field 300 m from the border.

At Lily Point we walked to the Lookout and gazed across the Bay at Delta, Surrey, White Rock, Blaine, the San Juan and Gulf Islands; a magical vista.  Far below were many rafts of birds, mostly specks, but we did identify Scaup, Scoters, Harlequin, Mergansers and a few Long-tailed Ducks.  We walked the forest trail and heard (some saw) both Ruby and Golden-crowned Kinglets.  Of course, we also heard Pacific Wrens and Rob & Marylile saw a Pileated Woodpecker.  Some saw Varied Thrush, but we missed Hummingbirds which I’m sure are there somewhere.  At Noon we met back at the Lily Point parking lot washrooms, and, because all the acceptable restaurants in Point Bob were closed today, we (10) decided to return to Mario’s in Tsawwassen for lunch.  A couple of pints of German beer and Beef Dip lunch hit the spot after a banner morning of birding.  You can download Anne Murray’s list of 65 species seen today.

On Monday, Nov. 2 your DNS Birds Committee gave a Presentation to Delta’s Mayor and Council promoting our vision for a Delta Birds and Biodiversity Strategy.  I think it was well-received; check it out at: http://www.delta.ca/your-government/mayor-council/meetings-workshops/council-meetings-online.  Also on Tuesday evening, we had our popular Delta Nats monthly meeting and AGM, electing an almost-fantastic, new (actually old) Executive.  Your Club is in great shape and doing tonnes of super stuff, and having fun doing it.  Check out reports, photos and other neat stuff on our website!

As always, comments encouraged, and let me know if this seemingly-endless verbiage bores you and you want off my List.  Cheers: Tom

P.S. The Twenty-seven were: Guru Anne M, webmaster Ken B & Anne A, photogs Terry C, Glen B, Jim K, sisters Pat & Maureen, Denise (aka Uma Thurman), and Roger (Two) K, Bird Box Ladner Jack, Lidia, Rob & Marylile, Nicki B, Mikie B, patient Kirsten W, and me are the 18 in the photo.  Other participants throughout the day included: shy but loquacious Mandy, time-challenged but awesome photogs Pascale & Alberto and Jonathan & Lorraine, our wayward Marian P, our linguistic Giant White Rock AL and his chauffeur Alice, and our own rabble-rouser healthy Tall Rick S.  That’s 27.  Later on Tuesday, Pascale & Alberto saw and photographed a Rough-legged Hawk and a Long-eared Owl on the Boundary Bay dike path near 72nd Street.