Appropriately, eleven DNCBers participated in a memorable, dry and almost sunny, Monday morning outing on November 11 to Stanley Park.  Lots of interesting stuff seen; you can see the photo evidence on our DNCB Picasa link at https://picasaweb.google.com/DNCBirding.

Seven of us (Glen, Mike, Hans, PB Lorna, Mary-Pat and visiting Ottawa daughter Leah who was anointed an honorary permanent DNCBer and scope-bearer, and me) car-pooled smoothly (no holiday traffic) from Petra’s to the Stanley Park Second Beach parking lot, arriving shortly after 8:00 a.m.  While waiting for Jean & Pauline, Tony and newbie Jack He to arrive, we scanned the shore as the tide was coming in.  Lots of Barrow’s Goldeneye in breeding plumage, some already performing their neck-breaking mating behaviour.

I did not see any Common Goldeneye, but Tony may have got a photo of a pair flying.  Beaut Harlequin Ducks and Pelagic Cormorants were also close by.  In the distance, down the shoreline, a huge flock of Surf Scoters was raised to flight by a kayaker, not by the Bald Eagles flying overhead.

Following introductions, we started our walk past the swimming pool toward Lost Lagoon.  American Wigeons and Mallards were in the stream, but a gorgeous irridescent Anna’s Hummingbird caught our attention while we were on the tiny bridge.  At the next bridge, someone had placed seed, so we got good looks at Song and Fox Sparrows, Dark-eyed Juncos, Spotted Towhees and native Douglas Squirrels. 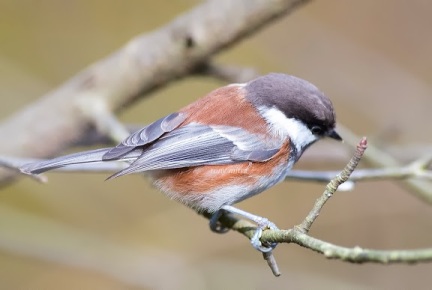 Further along a family of three River Otters were cruising close to shore and Glen got some nice shots of one eating a fish.

At Lost Lagoon the resident Mute Swans were seeking handouts with the ducks; 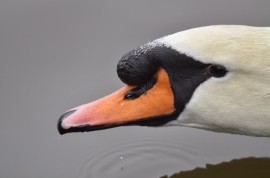 four Scaup were among them and we think we identified both Lesser and Greater.  A few gorgeous pairs of Hooded Mergansers were also in the Lagoon with several Double-crested Cormorants and American Coots.

Tony and Glen each took the obligatory Group Photo at the Nature House.

Among the ducks nearby was a large brownish hybrid “Mallard and something else”.  We wandered further around the Lagoon, past the Virginia Rail area; we didn’t see any rails, but Tony heard a reply from his tape.  In the bushes we finally saw a Ruby-crowned Kinglet, and a Hutton’s Vireo. 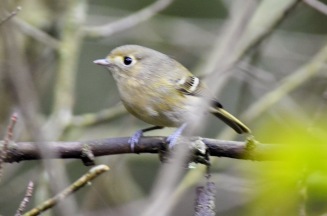 We headed back to Second Beach and heard the 11 o’clock Cannons, so we had a moment’s silence in memory of those who sacrificed their lives so we could enjoy this wonderful life we have today.  Smoko at the parking lot, beneath a Murder of Crows, was brilliant with PB Lorna’s sandwiches and ginger cookies complimented with M-P’s Almonds and Princess Leah’s mixed nuts, but still no beer.

We drove through the Park to the Brockton Point Lighthouse on Coal Harbour.  Not many birds there, but beautiful views of the city and mountains, and a neat fly-over of Airplanes in formation, including one group of Harvards.

Our four vehicles continued around to Beaver Lake.  Somehow, on this one-way short road, two gossiping gals got lost and had to be led back to the fold by our newbie Magellan, Jack.  It’s all good.  The path around Beaver Lake, although busy with runners and holiday visitors, was very productive.  Both Wood Ducks and Hooded Mergansers were cavorting together. 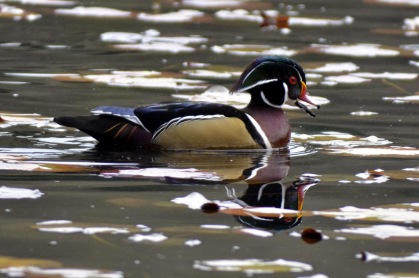 Green-winged Teal were feeding upturned in this swamp as well.  Both Chestnut-backed and Black-capped Chickadees were eating seeds (or crushed Mushrooms) from our hands.  A Red-breasted Nuthatch also ate from my hand, as did a Douglas Squirrel. 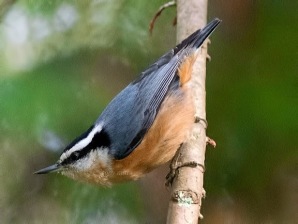 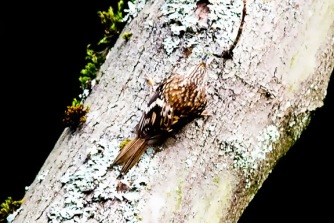 We saw more Kinglets.  Glen got a shot of a Brown Creeper.   Lots of neat Mushroom species here (slideshow below of Glen’s mushroom photos).

As we were leaving Beaver Lake, Mike spotted a posing Cooper’s Hawk.  It flew into the trees where we also saw a Steller’s Jay flitting about.

Approaching 1:00 p.m. some of us decided to go for lunch.  The Stanley Park Café was closed so we drove up to the Prospect Point Restaurant over-looking the Lions Gate Bridge.  This was a very enjoyable adventure; the fish & chips and chowder soup were delicious, the pilsner beer (finally) was awesome, the cole slaw was crap, and the 18% automatic Service Charge really pissed off Mikey.

All useful for inane conversation which kept me awake on the pleasant drive back to Tsawwassen, around 2:30 p.m.

Next Monday, November 18, we will meet at Petra’s at 7:30 a.m. for an outing “somewhere local”, perhaps starting at the Ferry Port for the Snow Buntings.  Check the Blog for updates.

We had a full capacity at our monthly Delta Nats meeting, also on Nov. 11 at Cammidge House, to hear Ron Long and see his beautiful photos of his trip to Namibia and Botswana.  Don’t forget John Neville’s presentation on Raptors of Canada at Cammidge House next Wednesday, November 20 at 7:30 p.m.  As always, comments encouraged and if these missives bore you, let me know and I will remove you from my List.  Cheers: Tom

I think it’s a Maersk

DNS: Delta Naturalists are a group of nature lovers whose aim is to foster interest in the natural history of the Fraser delta by sharing and enjoying nature and promoting environmental awareness and conservation. DNCB: Delta Nats Casual Birders is a group of Casual Birders who go Birding at different locations each week, usually within the Lower Mainland or in nearby Washington State.
View all posts by dncb →
This entry was posted in Bald Eagle, Beaver Lake, Cooper's Hawk, Douglas Squirrel, Harlequin Duck, Lost Lagoon, Pelagic Cormorant, River Otter, Second Beach, Stanley Park. Bookmark the permalink.