Fifteen DNCBers enjoyed a beautiful Fall Monday morning at Iona Regional Park and the adjacent Sewage Lagoons.  Hi-lites included: shorebirds, raptors, ducks and warblers; read on for specifics.  Check out the photo evidence on our DNCB Picasa site (if you can access it, there are GOOGLE+ problems).

Eight of us (Roger, Hans, Gerhard, Anne, Terry, Glen, newbie Moira and me) met at and car-pooled (2) from Petra’s at 7:30 a.m. on a dismal (forecast) but promising-looking morning.  Using the HOV lanes we got to the Iona Park parking lot at 8:15 a.m., well before our 8:30 a.m. schedule.   Jean, new grand-parents Jonathan & Lorraine met and joined us on the beach where high tide left no shoreline and no Shorebirds.  Hans spotted one Killdeer and several large flocks of “gull-like” Double-crested Cormorants flying over entertained a number of the amateur DNCBers.  Not much in the front pond (later we saw diving Scaups), so we walked the path toward the Sewage Lagoons.  In the first pond were lots of American Coots and Pied-billed Grebes, and Roger saw and photographed a couple of Ring-necked Ducks.  He also saw a couple of Merlins ,  and a Wilson’s Snipe, when no one else was around.  We heard chattering Marsh Wrens and calling Common Yellowthroats. 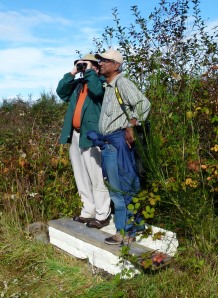 As we entered the back gate to the Sewage Lagoons, a Peregrine Falcon flew over us and landed on the hydro tower.  We did not see whether it was banded.  In the ponds were lots of waterfowl, including: Northern Shovelers, Northern Pintail, Gadwall, American Wigeon, Green-winged Teal and Mallards.

Four Long-billed Dowitchers in the mud caught our attention, but we were blanked on other Shorebird species there.  A Yellowlegs flew by and Anne saw a Pectoral Sandpiper fly-by too.  Further along, we saw lots of Sparrows, mostly White-crowned, Song, Savannah and some saw a couple of Fox Sparrows.  Golden-crowned Sparrows were probably there too and I think some saw Lincoln’s.  Newbie DNCBers Armin and Lili joined us here as did time-challenged Tony and Al.  Roger took the obligatory Group Photo.

We left the Lagoons via the back gate and followed the fence trail toward the Fraser.  I spotted a neat Warbler, but could not be sure it was the Palm Warbler seen there over the past few days.  A Cooper’s Hawk flew into the trees right in front of us and posed.  Then a large flock of Warblers arrived, mostly Yellow-rumped, perhaps Orange-crowned and Yellow with at least one Ruby-crowned Kinglet.  Lots of good photo ops here, which speedsters Roger and Terry missed.  Some saw an Anna’s Hummingbird and another “yellow-shafted” Northern Flicker as well as a few Downy Woodpeckers.

Newbie Moira missed nearly everything as she got saddled carrying the Scope, and always seemed to be ten paces behind us.  Nonetheless, for her scope-bearing efforts, Moira has earned full and complete DNCB membership.  Along the Fraser, four adult Bald Eagles were perched on pylons; they’re coming back.  A flock of seven Dowtchers flew over us and several of our constantly-improving photogs got neat shots on the wing.

Although it was approaching Noon, the weather was gorgeous, so we decided to take a quick walk along the causeway in search of Longspurs, Pipits, Buntings, Tattlers, Surfbirds or other recently-reported sightings.  Of course we were blanked on these, but a weird Starling caught our attention.  Also several impressive flocks of Snow Geese arrived and circled us looking for appropriate places to land.  We all left Iona very satisfied, despite no sandwiches or beer (Where was PB Lorna?) and got back to Petra’s well before 1:00 p.m.

Next Monday, October 14, Roger and I will be at Petra’s for departure at 7:30 a.m. on a local outing along the Boundary Bay Dike at 104th Street and then to North Forty Park.  We installed yesterday (Tuesday) our Delta Nats Barn Owl Nesting Box in the North Forty Park; see report and photos soon on our Blog.

Also, don’t forget our monthly Delta Nats meeting at Cammidge House, also next Monday, Oct. 14, where Ross Vennesland will give an illustrated Presentation on Great Blue Herons, a Species at Risk (meeting starts 7:30 pm).  As always, comments welcome, and let me know if you want off this List.  Cheers: Tom

Click on poster to see bio of Ross, and details of his topic

DNS: Delta Naturalists are a group of nature lovers whose aim is to foster interest in the natural history of the Fraser delta by sharing and enjoying nature and promoting environmental awareness and conservation. DNCB: Delta Nats Casual Birders is a group of Casual Birders who go Birding at different locations each week, usually within the Lower Mainland or in nearby Washington State.
View all posts by dncb →
This entry was posted in *DNCB, Cooper's Hawk, Iona, Long-billed Dowitcher, Pectoral Sandpiper, Peregrine Falcon. Bookmark the permalink.