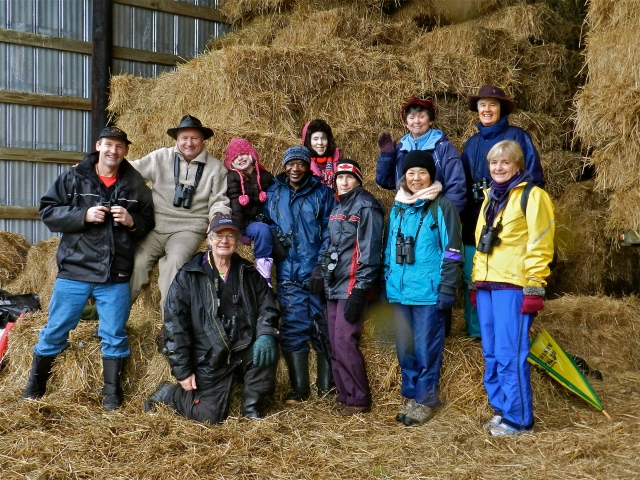 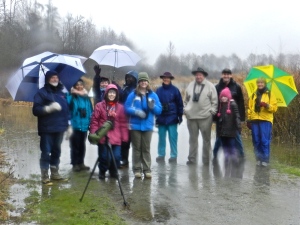 Four of us (Anne, Lorna, Kay and me) left Petra’s at 8:00 a.m.  and met the rest in the parking lot of Surrey Lake Park at 8:50 a.m.  It was pouring rain; I was surprised at the large turnout.  Following introductions, local experts Ken and Anne suggested we follow the trail around the lake.  From the bridge entrance, we saw neat stuff in the adjacent overflowing Golf Course pond; Ring-necked Ducks, Bufflehead and Hooded Mergansers.  And Surrey Lake had these and many more species including: Canvasbacks, Ruddy Ducks, Pied-billed Grebe, Common Goldeneye, Lesser Scaup, Northern Pintails, Green-winged Teal, American Coots, American Wigeon, Mallards and Double-crested Cormorants.  We got decent looks at these birds through the scope, but when we started to move closer along the path, it was flooded.  So we were forced to turn back.  According to Gareth, the water in the Park was higher than he had ever seen it.  Pacific Wrens and Golden-crowned Kinglets, spotted by “young-eyed” Christie,  entertained us on the way back to the parking lot.  We were pleased with the many sightings at Surrey Lake Park and disappointed at not seeing a lot of this new venue for a lot of us, but with the rain continuously falling, we decided to go to a hopefully drier Serpentine Fen Park.

My vehicle made a pit-stop at Knapp’s Nursery.  While the ladies relieved, I enjoyed Lorna’s turkey meatloaf sandwich; she is becoming the DNCB Gourmet chef.  Before the rest of us arrived at the Serpentine parking lot, Jonathan scared a Barn Owl out of the barn across from the lot.  While Ken was taking the Group Photo here at the barn, we got excited at seeing an “animal” moving in the grass.  On closer inspection, the animal movement was actually dirt being pushed up by a Mole creating a mound.

Weird but interesting sighting.  We continued on the path into the park and past the first lookout.  Lots of Bald Eagles and Northern Harriers around and a Red-tailed Hawk on a pole.  New species for today in the ponds here included; Northern Shovelers, Common Mergansers and Greater Yellowlegs (and a dead Muskrat). 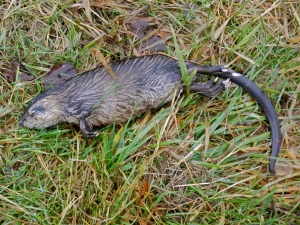 In the shrubs we saw Yellow-rumped Warblers along with common stuff (Northern Flickers, Spotted Towhees, Sparrows- Song, Fox and Golden-crowned).  Most of us were now able to recognize Purple Finches versus House Finches. 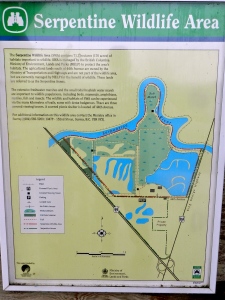 We walked to the far Lookout along the Serpentine River before turning around (to lessen the impact on Annie’s injured ankle).  Lots of Scaup, Common Goldeneye and Red-breasted Mergansers (I think), and a Double-crested Cormorant swallowing a huge fish was exciting, but disappointed the camera-less Jonathan.  We were blanked on Saw-whet Owls and I think the rain finally stopped when we got back to the parking lot.

Although the weather was shitty, the birding and inane (I’m pushed to use that word) chatter was almost enough to make an enjoyable outing.

I will be at Petra’s next Monday, January 14 for departure at 8:00 a.m. on an outing “somewhere around the Bay”.  Our monthly Delta Nats meeting is also that evening at Cammidge House with Ursula Easterbrook presenting on “The Spirit Bear Quest”.  Comments encouraged, check out our DNCB Blog for earlier reports and photos, and let me know if you want off my List to receive these weekly gems.  Cheers: Tom

DNS: Delta Naturalists are a group of nature lovers whose aim is to foster interest in the natural history of the Fraser delta by sharing and enjoying nature and promoting environmental awareness and conservation. DNCB: Delta Nats Casual Birders is a group of Casual Birders who go Birding at different locations each week, usually within the Lower Mainland or in nearby Washington State.
View all posts by dncb →
This entry was posted in *DNCB, Bald Eagle, Barn Owl, Muskrat, Northern Harrier, Red-tailed Hawk, Serpentine Fen, Surrey Lake. Bookmark the permalink.