After a 1½ hour drive following trucks through North Delta, Surrey, New Westminster, Burnaby and Port Coquitlam, while trying to ignore Gerhard’s incoherent babbling in the back seat, we (Roger also drove) arrived at the Minnekhada Lodge parking lot at 9:15 a.m. where Ken & Anne, Bryan & Janet and Marion S were patiently and eagerly awaiting us.  Fortunately, they had enjoyed some good birding while waiting for us as they saw both Swainson’s and Varied Thrushes, Black-headed Grosbeaks, a Great Horned Owl and a Black Bear cub.  During the introductions, and pre-walk pee break, we got our first looks at a couple of beautiful Western Tanagers.  (At the end of our walk, Marion found their nest right above us in the parking lot).

We began our walk at the first Lookout at the start of the Lodge Trail where we saw a couple of Willow Flycatchers.  Lots of different species singing around us and some heard (and saw) Pacific Slope Flycatchers and Western Wood Pewees, Red-breasted Nuthatches and Golden-crowned Kinglets.  We followed the Lodge Trail stopping occasionally to try for better looks at the one lone duck quite far out in the Lower Marsh which we think was a Ring-necked Duck.  Many Common Yellowthroat warblers around, and Turtles too.  A Northern Flicker entered a hole in a stump, but we did not see any young.  Interestingly, we saw two sets of fledging birds near each other; two young Cedar Waxwings and two young Western Tanagers, being fed occasionally by parents. 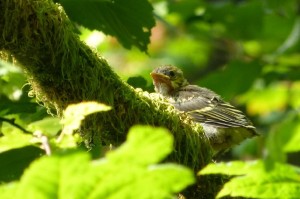 While most of us were watching this entertainment, Roger went ahead and photographed a mother Black Bear with her Cub.  By the time we got there, the bears were long gone off the trail into the dense bush.  All we saw was Bear Scat on all the trails in the park.

Momma Bear…blurred because the photographer’s hands were shaking!

Roger led us on a “short cut” to the Mid-marsh Trail, which was fairly tough slugging for some of us.  Heard lots along the way, but did not see many birds.  We spent a lot of time on the path between the two Marshes, watching a Hooded Merganser family, and trying to identify other waterfowl in the Upper Marsh which looked like Pied-billed Grebes, Horned Grebes, Scaup, Common Goldeneye, and Ring-necked Ducks. We followed the Mid-Marsh Trail to the Low Knoll Lookout where Roger took the mandatory Group Photo. 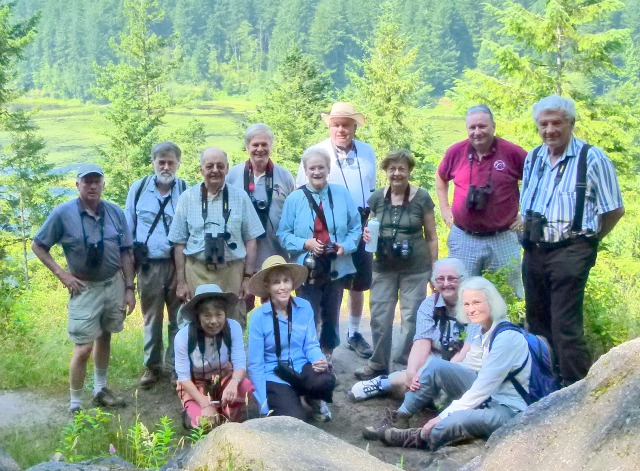 This spot was very productive for its brilliant vista and glorious sightings of more Western Tanagers and Cedar Waxwings, a singing Dark-eyed Junco and a pair of Chestnut-backed Chickadees.  We followed the Fern Trail back to the Lodge. Roger pointed out the many different types of Mosses, Fungi, Ferns, Flowers and other plants and trees, and several people were impressed and interested.

Others watched a Pileated Woodpecker on a dead tree and the occasional Rufous Hummingbird fly by.  We toured the grounds and ponds around the heritage Lodge building, then enjoyed Jane’s dish of Cherries and PB & Jam Sandwich (we haven’t forgotten you Lorna), with Marion’s and Marian’s tasty nut mixtures.  The ride back to Petra’s was very pleasant as we reminisced about the beautiful park we had just traversed and how lucky we were to be retired and living in beautiful BC; I think Gerhard was asleep.

I will be at Petra’s next Wednesday, July 18, for departure at 7:30 a.m. on an outing “somewhere around the Bay”, probably not far away (Pt. Roberts?) as Sandra and I have a luncheon engagement.  Again, comments encouraged, check out our DNCB Blog at www.dncb.wordpress.com for more photos and earlier reports, and let me know if you don’t want to receive these weekly missives.

DNS: Delta Naturalists are a group of nature lovers whose aim is to foster interest in the natural history of the Fraser delta by sharing and enjoying nature and promoting environmental awareness and conservation. DNCB: Delta Nats Casual Birders is a group of Casual Birders who go Birding at different locations each week, usually within the Lower Mainland or in nearby Washington State.
View all posts by dncb →
This entry was posted in *DNCB, Great Horned Owl, Minnekhada Park. Bookmark the permalink.