Eight participants (Roger, Lorna, Anne, Hans-Ulf, Mike, Eleanor, Jimmy and me – names mentioned at our Guru Anne’s request because we forgot the obligatory Group photo) enjoyed a very comfortable morning of birding along the Boundary Bay dike and at the old Wireless Station (aka North 40) behind Boundary Bay Airport.  Hi-lites of the outing were: our first Lazuli Bunting, Pacific Slope Flycatcher, lots of Warbler species and four Coyotes.  Check out Roger’s and Jim’s photos, soon I hope, on our Picasa site http://picasaweb.google.com/dncbirding. 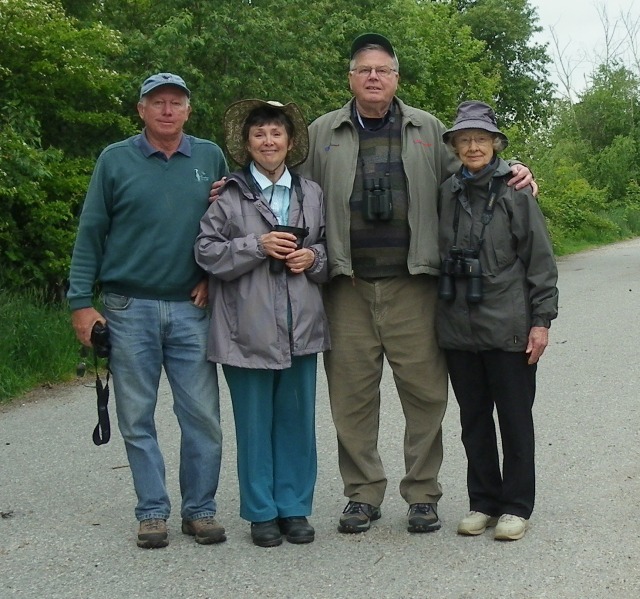 We left Petra’s at 7:30 a.m. (earlier time) and drove by the huge SFPR construction along 64th Street to the dike.  Wandering along the path for about a half hour, we saw several Warbler species in the bushes including: Yellow-rumped, Orange-crowned, Yellow, Wilson’s and Common Yellow-throats.  Four Sparrow species also seen: Song, Savannah, White-crowned and a late Golden-crowned.  A few Killdeer and Yellowlegs flew by for our only Shorebird sightings.  The tide was way out, and we spotted four Coyotes running back and forth near where the water started.  Lots of Bald Eagles and Great Blue Herons around.  In the pond behind the greenhouse were Northern Shovelers, Gadwall, American Wigeon and Mallards.  One Mallard had 11 ducklings following her.  Next stop was the end of 72nd Street where we saw a lot of the same stuff.  A Red-tailed Hawk, Brewer’s Blackbird and a few brilliant American Goldfinches added to our day’s list here.  Then the required Pit Stop at Kings Links Golf Course before heading to the Back 40.

Lots of resident Common Yellowthroats along the Base’s main road.  While enjoying the brilliance of a Yellow Warbler, the insouciant Hans (look it up) spotted our destination bird, a Lazuli Bunting, perched above the warbler.  It posed for us before Jim scared it away, not once but twice.  It was singing loudly, and another seemed to be responding, but we only saw the one bird.  Jim’s expected photos on Picasa will be the only justification for his birding faux pas.

We wandered along the streets of the Wireless Station Base, enjoying Delta Corp.’s new signage about this post-war base.  The active Bald Eagle’s nest and a Downy Woodpecker’s loud drumming branch impressed Mikey.  While enjoying a Pacific-slope Flycatcher, the effervescent Lorna (and PB Sandwich provider) alerted us to a Brown-headed Cowbird.  A constantly singing Black-headed Grosbeak was difficult to find at the top of a beautiful Oak tree.  Then Roger identified a Yellow-rumped Warbler singing, and we saw the House Finch that the song was coming from.  We were blanked on the Bullock’s Oriole and Willow Flycatcher, which we saw here last year at this time, but it was another fun morning of casual birding.

I will be at Petra’s around 7:00 a.m. next Wednesday, June 1, for departure at 7:30 a.m.  We may go further afield on a longer outing, destination to be determined (e.g. Maplewoods, Burnaby Lake, other).  As usual, comments welcome, enjoy our Blog at: www.dncb.wordpress.com, and let me know if these literary gems bore you.

DNS: Delta Naturalists are a group of nature lovers whose aim is to foster interest in the natural history of the Fraser delta by sharing and enjoying nature and promoting environmental awareness and conservation. DNCB: Delta Nats Casual Birders is a group of Casual Birders who go Birding at different locations each week, usually within the Lower Mainland or in nearby Washington State.
View all posts by dncb →
This entry was posted in *DNCB, 64 Street, 72 Street, Bald Eagle, Coyote, Lazuli Bunting, North Forty/VWS, Orange-crowned Warbler, Red-tailed Hawk, Wilson’s Warbler, Yellow Warbler, Yellow-rumped Warbler. Bookmark the permalink.