Not surprisingly, with several regulars off to the convention at William’s Lake and the damp morning, only four stalwart birders were present for our tour of the Boundary Bay Airport lands (the “North 40”).  Mike and Roger met at Petra’s where Tom checked in to make sure we were going to fulfill our duty to keep the string of outings intact.  At the 72nd Street entrance we found Marg and Rick waiting and,  donning our rainware, we set off in search of exotic species.  After a very quiet start we started to find the regulars; Golden, White-crowned and Song Sparrows, Black-capped Chickadees, and scattered “butter bums”.  The latter was puzzling until we determined that Marg was referring to the Yellow-rumped Warblers.  The highlight of the drizzling day was (sorry Lorna…we promised not to see anything interesting while you were away) Rick’s sighting of a Western Tanager.  Apologies for the fuzzy photo, but it was quite a distance away and it was raining. 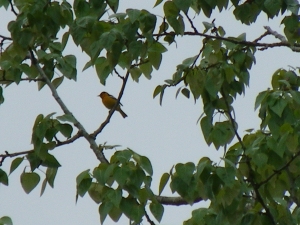 At the top of a dead snag sat a Downy Woodpecker, a female, and a second one flew by which we assumed was the male.  A few hundred meters away we saw a pair of Red-tailed Hawks, and several eagles were soaring about.  We enjoyed reading the new signs, complete with photos,  illustrating the history of the Wireless Station.  These were spaced at what were important sites such as schools, churches, and major buildings.  Hopefully, the signs are signs that the area is to be preserved “as is” for public use.

While birding was our main purpose we very much appreciated the variety of beautiful trees lining the streets, especially the willows, chestnuts, oaks, hawthorns and others.  The “eagle tree” had mother on the nest but was difficult to see as our binoculars were fogging over in the rain.  Just west of the nest there was a patch of Common Teasel, an uncommon weed (photo below) which can become a nuisance if not controlled. 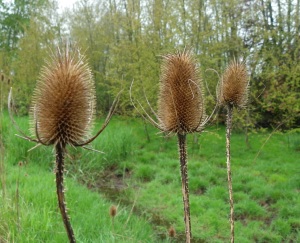 By this time we were getting a bit wet and started back and found a large number of Golden-crowned Sparrows on the path across the grass field by the reservoir.  (Just to get it on record, the “short cut” across the field worked!).  And, to finish off the “North 40”, we had an excellent view of an Orange-crowned Warbler doing its trill!  A quick trip down to the foot of 72nd yeilded only a Northern Harrier.  At this point, Marg and Rick departed to Tim Horten’s and the sturdier specimens decided to go over to the foot of 12th Avenue for a quick look where there was little to see beyond a good view of a Common Yellowthroat and a few ducks.

Unfortunately, we failed to get a group photo.  Despite the weather, it was a worthwhile experience and yeiled the first Western Tanager , for us, of the year.  No decision was made regarding next week and it will probably be a local outing with the 7:30 meeting at Petra’s.  We should probably be thinking about going farther afield though to such places as Burnaby Lake and Pitt Lake (repeating last year’s excellent outing).  Lorna, we miss you and your “Bird Alerts”!

DNS: Delta Naturalists are a group of nature lovers whose aim is to foster interest in the natural history of the Fraser delta by sharing and enjoying nature and promoting environmental awareness and conservation. DNCB: Delta Nats Casual Birders is a group of Casual Birders who go Birding at different locations each week, usually within the Lower Mainland or in nearby Washington State.
View all posts by dncb →
This entry was posted in *DNCB, North Forty/VWS. Bookmark the permalink.