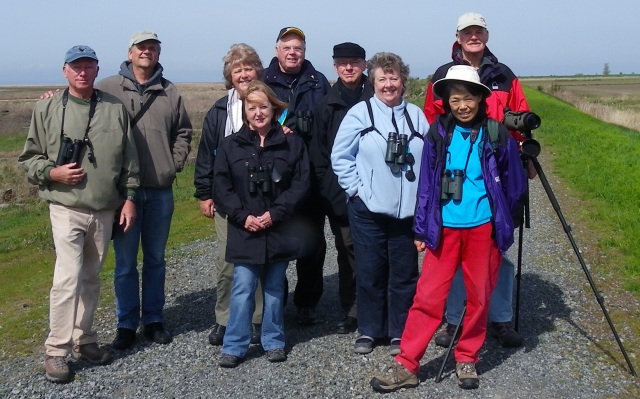 On a sunny, but chilly, Wednesday morning a small turnout at Petra’s including Mike, Hans, Marg, Rick, Roger and Deborah (taking a day off work to be with us) met to decide on the days birding adventure.  Tom, however, had left instructions that we were to go to Brunswick Point where, he said, curlews were to be found (species not specified).  On our way we phoned John and Kay so they could meet us there.  Also, since Lorna was unable to attend, we were forced to keep our spirits up by telling Lorna stories, such as the “birch stump bird” incident.

The trip to Brunswick was birdless until we reached a large lawn just before the Point where we found a large number of Yellow-rumped Warblers (all Audubon), a pair of Goldfinches, a Red-shafted Flicker, and a number of House Finches.  At the parking area Roger’s wife, Rose, was waiting and shortly after, John and Kay arrived.  Early in the walk more Yellow-rumped Warblers were sighted and Wilson’s Warblers, more Gold Finches, and a Golden-crowned Kinglet.

On the outer side of the dike we were treated to beautiful views of a Common Yellowthroat, and Marsh Wren (Long-billed Marsh Wren according to Hans’s museum piece bird book).  Savannah Sparrows were also abundant and some late Dark-eyed Juncos were also seen.  On the shore line, too far for accurate identification we felt we saw some Black-bellied Plovers, Dunlin, and flocks of Western Sandpipers along with definite Wigeon, and Mallards.  Overhead, a single Sandhill Crane flew by accompanied by a Bald Eagle.  Eagle-eye Rose spotted a Hermit Thrush and most of us had a quick look at it.  Aside from a few eagles, the only other raptor was a single Northern Harrier.  On the return walk, Marg sighted a Common Merganser about two miles away across the river.  We also were able to see both a  Golden-crowned and a Ruby-crowned Kinglet.  Some other common birds included Brewer’s and Red-winged Blackbirds, Brown-headed Cowbirds, House Sparrows, and Robins, and a Wilson’s Warbler.  The only swallows seen were Barn, Tree, and Violet-green.

One disturbing sighting was a large crop of Hogweed resulting from the seeds dropped before last years application of pesticide. There were signs warning about contact indicating that the people responsible for its control were aware of the problem though.

Strangely, no curlews were seen leading one individual to comment that Tom had sent us on a “snipe hunt”!  Hopefully Tom, and Lorna will rejoin the group next week for a trip to, as of now, an undisclosed location.   The “North Forty” is a possiblity as a lot of the warblers have returned and the Lazuli Buntings might make an appearance!  Roger 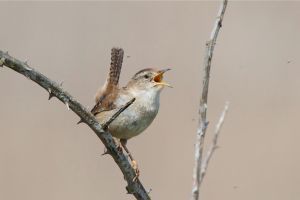 DNS: Delta Naturalists are a group of nature lovers whose aim is to foster interest in the natural history of the Fraser delta by sharing and enjoying nature and promoting environmental awareness and conservation. DNCB: Delta Nats Casual Birders is a group of Casual Birders who go Birding at different locations each week, usually within the Lower Mainland or in nearby Washington State.
View all posts by dncb →
This entry was posted in *DNCB, Bald Eagle, Brunswick Point, Dunlin, Northern Harrier, Sandhill Crane, Western Sandpiper, Yellow Warbler, Yellow-rumped Warbler. Bookmark the permalink.