Sixteen birders in a convoy of six vehicles spent a gorgeous, clear and sunny Monday morning (Jan. 3) travelling the farmers’ fields of Ladner, then Westham Island and then at Reifel Bird Sanctuary.  They like their names in print: Roger, Rochelle (without Don), Hans-Ulf, Lorna Terry, John (without Kay), newbie Ansa, Kathleen, Deborah, Bill & Mary, Rick & Marg, Jonathan & Lorraine.  Hi-lites of the day were: five owl species (six if you include Hans-Ulf’s wooden statue), Red-breasted Sapsucker, a couple of Ring-necked Ducks and many other water fowl species in beautiful breeding plumage, several photographable raptor species (Buteo-Red-taileds, Accipiter-Cooper’s and Sharp-shinned, Falcons-Merlin, and Northern Harriers).  You can easily access photos of this outing by clicking on our photogs’ DNCB Flickr site.

We started at the Kingfisher Bridge on the Tsawwassen First Nations (TFN) Reserve.  The ponds in the fields were frozen but the water was running in the creek.  No Kingfisher seen but a few Green-winged Teal, Song Sparrows and Roger spotted a Marsh Wren.  In the bay toward the ferry and coal/container port terminals were thousands of ducks, a few swarms of Dunlin and lots of Great Blue Herons from their colony at nearby Tsatsu Shores, and of course many Bald Eagles.  Along the TFN road were lots of other Sparrows (White-crowned, Golden-crowned, Fox) and House Finches as well as a Sharp-shinned Hawk, photographed nicely by Rochelle.

We checked out the pair of Red-tailed Hawks posted near their nest on 34th Street.  Then in the field on the other side of 34th, we were surprised to see at least nine Northern Harriers (no adult males) weaving back and forth, occasionally dropping to land.  Among them was one Short-eared Owl which was noticeably having confrontations with the Harriers as they weaved.  We saw the Harrier/Owl’s concern when above the grass a Coyote jumped and pounced on something.  Then he came to the field’s edge and stared at us before returning to the cover of the tall grass.  There may have been two Coyotes there.  The Harriers eventually dispersed and so we left toward Westham Island bridge, confused but exhilarated with this experience.

At the landing at Canoe Pass, the water in the Fraser River was as flat as a pancake.  A Western Grebe came by us with several pairs of Common Goldeneye while a group of Common Mergansers were diving down toward the mouth (a Red-breasted Merg may have been with them).  Three Mute Swans and Double-crested Cormorants were near the other side.  And what may have been a Northern Goshawk was perched on top of a tree in the distance on the other side.  Roger and Rochelle also saw a couple of Ring-necked Pheasants in the ditch.

On Westham Island, along with umpteen other photographers, we stopped to see the Northern Hawk Owl which has been posing there for more than a month now.

At Reifel, in the bit of open (i.e. not frozen) water at the entrance were several Scaup, interestingly both Lesser and Greater, among the Mallards, American Wigeon and American Coots. Near the resident Black-crowned Night Herons were large flocks of Red-winged Blackbirds, one flock of about 40 birds seemingly all female.  Many of the Reifel ponds were frozen, but in the bits of open water we saw brilliant Wood Ducks, Hooded Mergansers, Northern Shovelers, Northern Pintail and Bufflehead.  Two Great-Horned Owls were sleeping near each other around the area where they nested a couple of years ago.  I wonder what they are contemplating now?  A Saw-whet Owl was in a holly bush where we often see them.  We saw a Red-breasted Nuthatch, Brown Creeper, and either a Pacific/Winter or Bewick’s Wren along the trail.

From the Tower, the clear view of snow covered mountains and Vancouver Island was beautiful, and there were thousands of ducks in the Strait.  We saw a couple of flocks of Snow Geese (~50 in each) fly by, but it looks like most of the 60-90,000 birds may have temporarily moved south to Skagit, which they habitually do around this time.  One lonely Snow Goose was foraging with a flock of 200+ Canada Geese in a field near Alaksen.  Several Trumpeter Swans were foraging along the shore, and later we saw a flock of 50 feeding in a field on the way back to Petra’s.  The 8 visiting and 3 resident Sandhill Cranes gave us a close-up fly past before landing in another area of the Sanctuary. 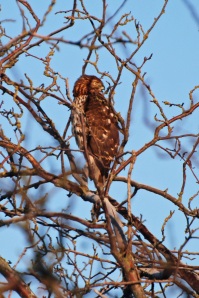 On the road leaving Reifel, we stopped by a bus-load of Japanese students who were focused on a Red-breasted Sapsucker seemingly glued to the trunk of a tree.  Of course, we all stood in front of them so we could get good looks.  Then, following John getting permission, we visited the Husband farm where we saw a Barn Owl, our fifth owl species of the day.  A Merlin was in the same tree on 33rdAvenue where we often see one, so, on the day, our photogs were able to get close-up photos of buteos, accipiters and falcons.  Although I was a bit miffed at missing our Smoko/Tea Break at 10:30 a.m., it was another awesome day of casual birding.

I will be at Petra’s around 8:00 a.m. next Monday, January 10 for departure at 8:30 a.m. on a DNCB outing, probably to Iona Park and Sewage Lagoons.  Don’t forget our monthly Delta Naturalists’ Society meeting on that evening (Dec. 10) where our own Terry Carr will give a presentation on Birds and Kasbahs seen on his and Janan’s travels in Morocco.

Next Wednesday, January 12, is our Delta Nats “Birds-on-the-Bay” outing in Boundary Bay Regional Park, leaving Cammidge House at 9:00 a.m.  Sorry about the length of this missive, but I guess I got a bit exuberant with the wonders of the outing.  Comments are welcome and please advise if you want off my list of Report recipients.