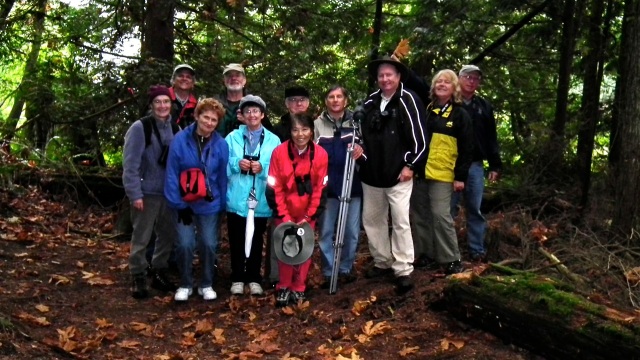 Eleven participants (Roger, Lorna, scope bearers Ron & John, Kay, wet camera-less photog Rick & Marg, newbie Lorraine N, Hans, our humble guide Bev and me) enjoyed a wet morning wandering around the diverse habitats of the University of British Columbia’s (UBC) Farm.  Monday morning traffic from Tsawwassen to UBC was horrendous, so we arrived late (~9:15 a.m.) to meet our “guide” Bev Ramey at the gate to the Farm.  Bev is Past President of BC Nature, a very knowledgeable patron of UBC Farm, and a super nice lady.  At the gate while waiting for Roger Myer-Penske to arrive, we were greeted by one of the resident Red-tailed Hawks.  Then a small raptor whizzed by, an American Kestrel; according to the UBC Farm Bird Checklist, Kestrels are not common, and have only been previously seen there in October.  This bird entertained us most of the morning, posing on the tops of trees along our walk.  Bev showed us the Bald Eagle’s nest at the entrance, then we walked the trail around the farm for about 2 ½ hours, stopping at the Nine Stations; it’s like a golf course.

The first couple of stations were vegetable and flower gardens, full of Dark-eyed Juncos, Black-capped Chickadees and three Sparrow species (Song, White- and Golden-crowned) which we had fun identifying as many were juveniles or in non-breeding plumage.  Then throw into the mix the Finches, House and American Gold.  Apparently there is a line-up of customers on Saturday mornings to purchase the veggies and plants produced by the UBC students here.  Next, we entered the woods, which is second growth forest.  Lots of neat mushrooms and “nurse stumps”.  We heard several Pacific (formerly Winter) Wrens and lots of Kinglets.  Some of us got good looks at a pair of Ruby-crowned Kinglets that may have been “doing it”.  A pair of Downy Woodpeckers pecked up a dead trunk.

It started to pour, but we forged on to some more garden plots, including some decorative ones looked after by elementary school kids.  Many American Robins around, and we spotted the first of several Varied Thrushes in a tree near the red and orange(?) rhubarb, which I wasn’t allowed to taste.  But the Blackberries and Raspberries were tasty.  Roger, and some of us fleetingly, had seen a Hermit Thrush earlier in the woods.  We continued to trudge through the various other created habitats, including Cottonwood stand, bull rushes (swamp) and Sunflower patch.  Lots of juncos, sparrows and finches, but we could not spot anything unusual.  Two Ravens posed in a tree near one of the Kestrel’s perches.  A Northern Flicker called and flew by.

We said our thank-yous and good-byes to Bev at 12:15 p.m. as she bicycled home; Bev is so environmentally conscientious.  We drove to nearby Metro Vancouver’s Park at Camosun Bog, another spot on UBC “endowment land” that I had never seen.  Lots of construction including a cedar split rail fence surrounding the park and new boardwalks through the bog.  A Steller’s Jay greeted us on arrival, along with MV staff who said a Pileated Woodpecker and Evening Grosbeaks had been seen there recently.  We heard the Pileated, and saw another beautiful Varied Thrush, but no grosbeaks.  The smooth drive back to Petra’s was uneventful, arriving about 1:30 p.m.  Because Rick did not have his waterproof camera, we can expect only a group photo of today’s outing.  Note that I now know how to put stuff on the Blog, so it’s up-to-date; check it out.

Our Delta Nats monthly meeting is next Monday, October 11 at 7:30 p.m. at Cammidge House.  Markus Merkens will give a presentation on Beavers.  Also next Monday, even though it is Thanksgiving Monday, I will be at Petra’s around 7:30 a.m. for departure at 8:00 a.m. on an outing “somewhere around the Bay”.  Please let me know if you don’t want to receive these reports.

DNS: Delta Naturalists are a group of nature lovers whose aim is to foster interest in the natural history of the Fraser delta by sharing and enjoying nature and promoting environmental awareness and conservation. DNCB: Delta Nats Casual Birders is a group of Casual Birders who go Birding at different locations each week, usually within the Lower Mainland or in nearby Washington State.
View all posts by dncb →
This entry was posted in *DNCB, American Kestrel, Bald Eagle, Camosun Bog, Pileated Woodpecker, Red-tailed Hawk, UBC Farm. Bookmark the permalink.